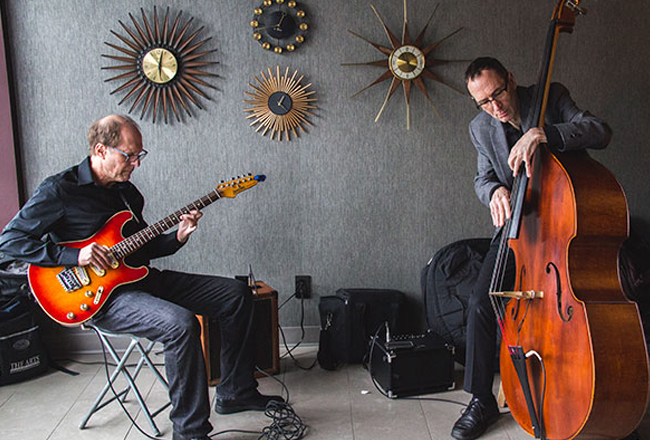 Barrie is a wonderful city with a vibrant downtown core that sparkles with energy in all four seasons. Winterfest, the annual February event is serenaded by the February Blues, the Bluesy Jazzy brainchild of Robin Munro and we are richer for it.

The music extends past the Barrie borders; sending notes and melodies via the Simcoe P 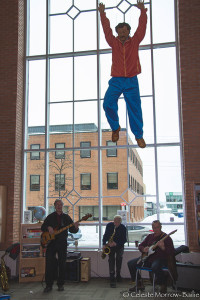 ublic Libraries south to the Innisfil and Bradford branches, and north to Midland. Bundled up and ready to listen, this reviewer, with photographer in tow was excited to explore new venues added to the extensive repertoire of sites. I have personal favourites, artists that leave me awestruck every time by their performances. It is delightful to add to that list and share with readers, knowing that many of the performers will return for the extended summer Blues and Jazz festival, with Simcoe Dining being a sponsor of both events.

With winter blowing into town for the weekend, I kept my route centered on the downtown core, this allowed us to walk to many venues. Stopping into Tara Indian Cuisine we caught a few songs from Carlos Del Junco, he blows a mean harmonica, while accompanied by Jimmy Bowskill on guitar. A quick street crossing was a step back in time, the speakeasy theme at Hudson fit the sway of the Bill Evans Trio. Dipping into Canvas and Cabernet for my first interview of the night with Wayne Buttery was a smooth move. As with every Blues musician I have spoken to, he refers to playing as a “labour of love, if you are doing it for the money you are doing it for the wrong reasons”. Wayne’s inspiration to the Blues came back in the 60’s. “A long ways from the Mississippi Delta. I was walking by the Colonial Tavern in Toronto and I heard the music of James Cotton and Buddy Guy. That’s where it all started. Someone once said I had to get a real job, but I have been fulfilling my life’s dream since then, as a song writer, guitar player and singer.”

Sticky Fingers has a new location on Dunlop Street, this is the showcase venue for the big names. Jack de Keyzer had the opportunity to impress us twice at the festival, at the club with his full band, dance floor filled with couples of all ages bopping to his bluesy style. While he positively owned City Hall rotunda with his amazing one man show, “The Evolution of the Blues Guitar.” A shout out to Jack de Keyzer for sharing his original script with me to read, while I write this review. Dear Jack; you simply must record this epic piece of material, it is a history lesson for the ears that belongs in the collection of all music lovers as a video or audio recording, ‘tis brilliant! You took us on a journey from the “Mississippi Delta Blues of the 1930’s to the psychedelic blues of Jimi Hendrix.”

You brought styles to your strings, from the spirituals to soul, R & B, boogie woogie, swing and funk, then you added a kick of the wah wah pedal too.

You captured us on the first note and kept us spellbound well past the encore! As February Blues XVIII organizer Robin Munro stated, your talents have been recognized with two Juno’s but you have yet to be nominated for the Order of Canada; it is an honour you deserve!

The Ontario Musicians Association was represented at the rotunda, Jack de Keyzer signed up. The OMA is “a non-profit organization that promotes the spirit of good musicianship through its activities and supports various community causes and charities including No Student Left Out. The OMA is committed to promote and provide a place for fellowship and assistance to musicians, music students and community members who share these values.” A great cause.

Speaking of good musicianship let me segue into some stories about Paul James; actually Paul is the story teller. During our interview I was totally captivated; this man needs to write a book, he has a natural rhythm and cadence on and off stage. He draws me in, first with his gratitude, “that I’m still out there”, then with the tales he tells. “If anything I can contribute maybe I was one of the first guys to do it independently, like when there wasn’t a road, I made a road”. “I was fortunate that I was able to play with a lot of my idols, like Bo Diddley. A lot of guys played with him once or twice but we have played between 1973 and 2006, we maintained a friendship for that long and he took me under his wing and gave me tips and I learnt by playing with him to be an entertainer, not just a musician, I was happy he liked me”.

“Bob Dylan, he invited me to play with him on quite a few occasions, we became friends”. Remember Willy De Ville? Google the name if you don’t, Paul shared he “toured all over Europe with the band Mink De Ville in the early 80’s, met the Rolling Stones too, this new band out of Ireland, known as U2 opened for us”. Jeanne Beker admired his look, as he got “De Villed”. Much Music knocked on his door, crescendo builds, I lean forward in my chair, it is hypnotic, yet Paul James is humble, grateful, and he says he feels very lucky.

He had “good mentors, amazing coincidences, made friends along the way”. “For the longest time I only looked forward but now I am looking back, I look at a picture and the picture will bring back all these stories”.

Paul James, Blues Musician. Trail Maker. Determined. Now I have to convince him to add budding author and storyteller to the long list of achievements beside his name.

By Sunday it was time for soothing sounds and pouring a glass of Lorne Lofsky and Richard Whiteman. He played with Oscar Peterson, became a member of his famed quartet. It was the great Oscar Peterson himself who subsequently helped present Lorne to the international stage.

I asked Lorne about his influences: “You take all the experiences and jumble them up; almost like in a food blender and they all get blended together. I play from a traditional sense and I have come up with some stuff, a unique blend, kind of like a coffee or wine that sounds like me but based on things I have listened to. There is an expression you are what you eat, musicians are “you are what you hear”. You take what you hear and you combine it in different ways and what ultimately comes out is a blending of our influences and it’s a natural organic thing, nothing that’s forced. We are the sum of what we have worked on and all the different musical situations we’ve been in”.

Tradition has me walk from a concert while the last notes are playing, to hold onto the music while I cross the threshold back into the world of other sounds.
The music of the February Blues XVIII, will hold me till the summer Blues and Jazz Festival, see you there!

This review was originally posted on Simcoe Dining in February 2015.