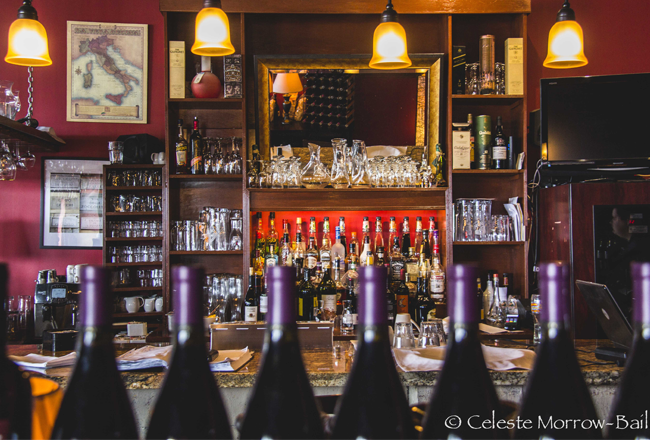 Music and lighting is soft and flattering. The view of Kempenfelt Bay is stunning and the chalk board assures diners that this venue is event friendly; accommodating communions, confirmations, weddings and baptisms. 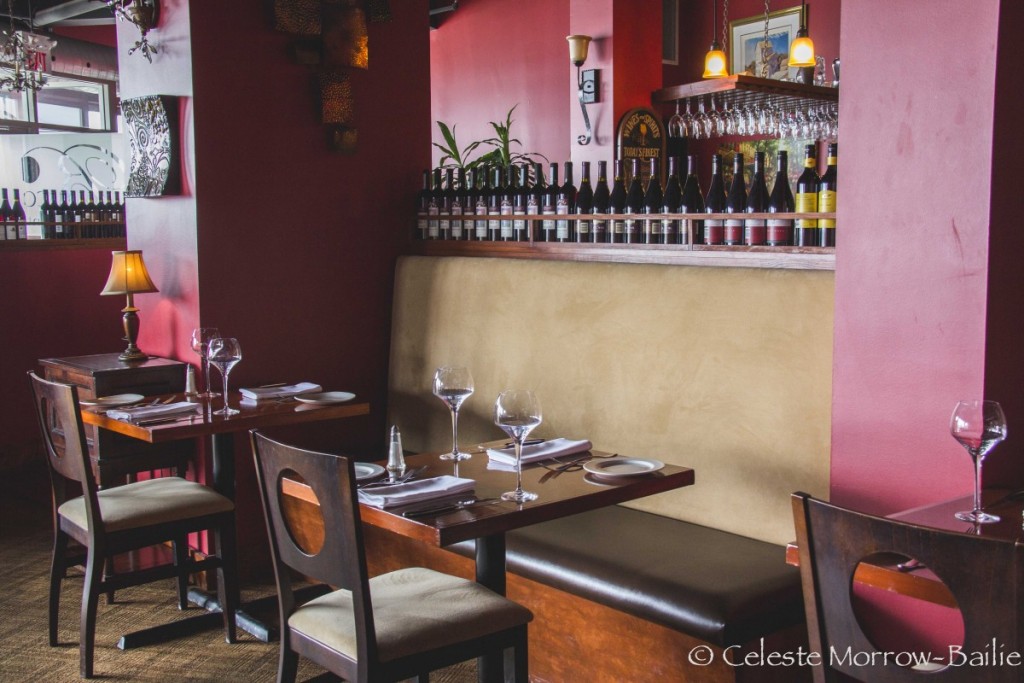 As co-owner Enrico Angelucci tells me, the Italian Community in Barrie will have every Sunday booked during the spring and summer months to celebrate joyous family occasions which makes the owners of Il Buco Ristorante very happy! The winter holiday season is another busy time at Il Buco, with family and business Christmas parties booking well in advance to assure their function is accommodated.

The Dunlop Street entrance is somewhat inconspicuous, but there is ample parking and wheelchair accessibility when entering at the rear of the building from the Simcoe Street parking lot.

I suspect that the condo dwellers nearby frequent Il Buco regularly given the location and the view! Enrico Angelucci, his wife Sue Varga and part owner Karl Sawyer have proudly operated from this second floor spot for seven years. They are most ably assisted in the kitchen by international Chef George Silva. With photographer daughter eager to accompany me, we each took a different approach to the menu, as at lunch there is the option of ordering a la carte or enjoying the three course Prix Fixe.

Beef Carpaccio is a favourite of mine and I was pleased to see it makes an appearance here; this thinly sliced rare beef tenderloin is served with mixed greens, drizzled with olive oil and topped with grated fresh Parmigiano cheese. Delicious. 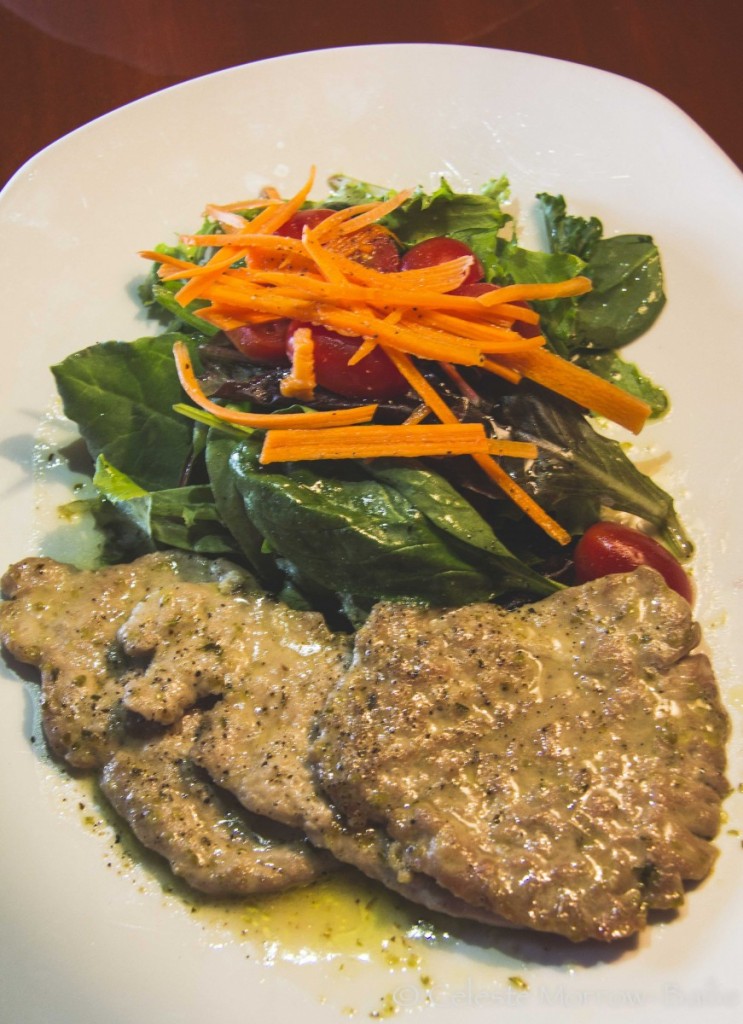 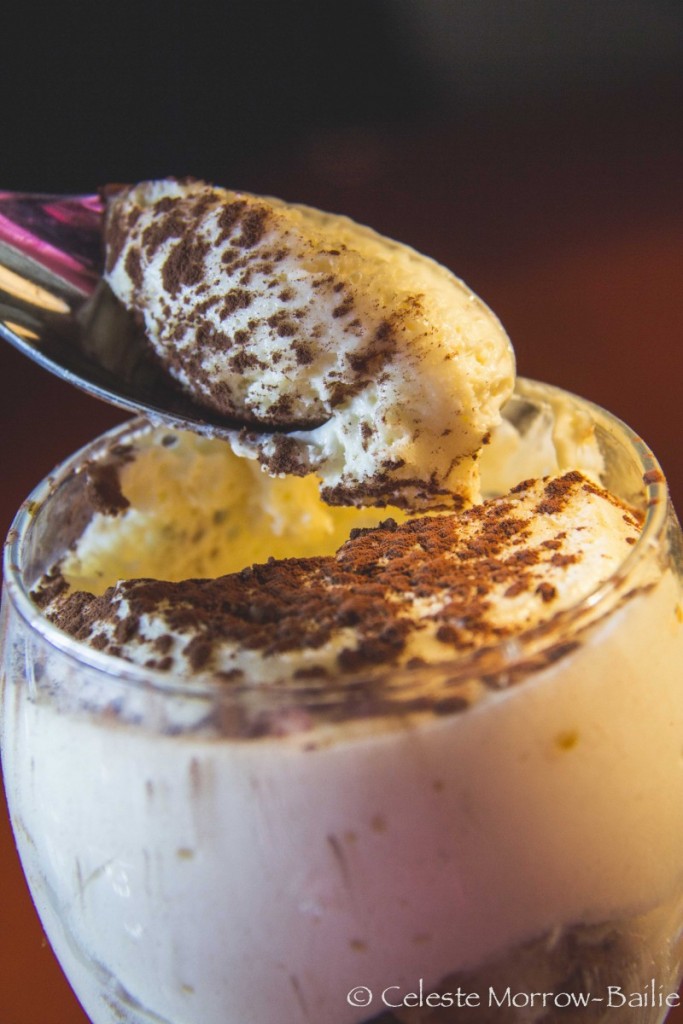 From the three course Prix Fixe, the Classic Caesar Salad was darling daughters choice to start. While substitutions aren’t generally offered, our server, owner Sue Varga, was most accommodating and graciously allowed the switch of gnocchi instead of Penne pasta, in the “Funghi Penne with mushrooms in a rosé sauce”. While the gnocchi is not made in house, it presents with a rich flavourful sauce.

I asked Sue Varga to choose lunch for me, her recommendation of Pork Scaloppini in a lemon white wine sauce with Italian salad was sized well, the light lemon zip of the pork was refreshing. Dessert is included with the Prix Fixe lunch and while I wouldn’t usually have sweets at lunch, Sue strongly suggested that I try the Tiramisu. I am glad I did; the portion size was just right and the coffee flavour a great ending to the meal.

While a working lunch doesn’t lend itself to wine sipping for me, nor does my editor recommend this, the wine list selections complement the foods, although I always like to see more of our fine Ontario VQA wines represented.

I returned to talk with Enrico Angelucci and learnt just how committed he and Sue Varga are to the restaurant. Not many folks would commute from Muskoka to Barrie daily, but they do! When a friend showed them the location, they knew it would be ideal for a restaurant and the daily drive is taken in stride. The family is considering a move south to Barrie, as they have grown attached to the community that supports their restaurant and the waterfront at the doorstep too!

Il Buco supports local where possible, shopping for produce at Cancilla’s, Flying Monkeys brews are on tap, poultry and eggs from a Stayer producer and my personal fave Local Foods Mart, Enrico fondly referred to as “our emergency store, you need something you run out down there, and most of the time you find it”.

Menu changes are small and subtle as their regular clientele, who tend to come every week or two expect tradition, the “simple plates”. There are four or five specials added to the menu each weekend. “Osso Buco and Chicken Parmigiana will always be offered as people get attached to it.” “The day we stop, people complain”.

“Business is good; it has been growing steady since we opened”. As Enrico Angelucci proudly tells me, Il Buco Ristorante has been named as one of The Best 100 Restaurants in Canada, according to Open Table.

In his own words; “Food is part of life, if you enjoy it with a glass of wine, there is nothing better really to end a day of work, you have a good day, a good meal at night, if everything was good for dinner you go to sleep happy, and a good glass of wine is always good, good wine makes good blood”.

I’ll drink to that! 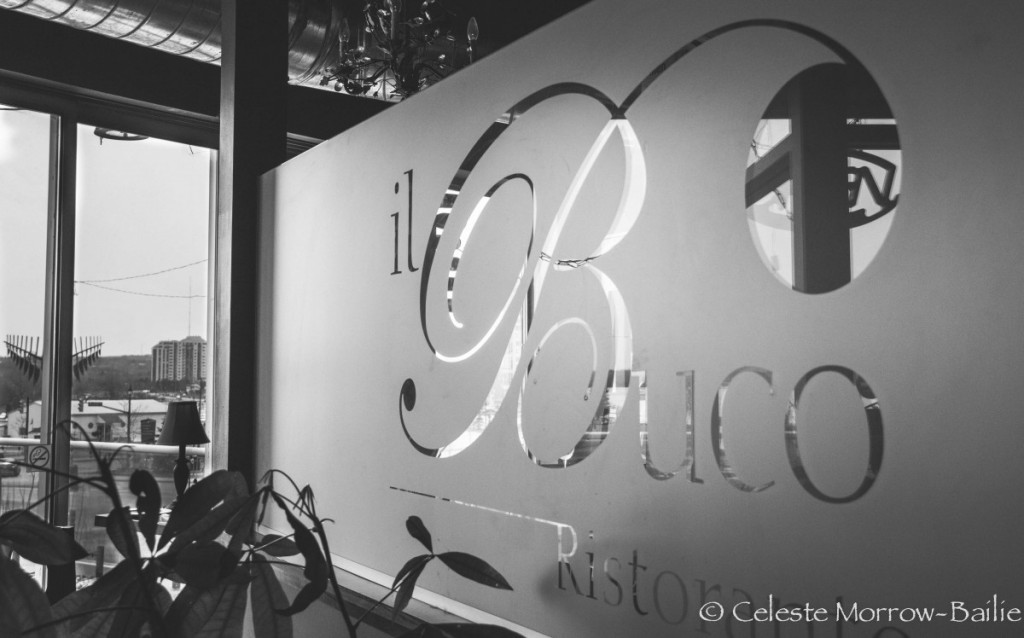 Penelope Morrow is a writer, editor and local food aficionado from Barrie, follow her tweets @penelopejmorrow

This review was originally posted on Simcoe Dining in April, 2015.

First Light celebration held at Sainte-Marie among the Hurons

10fold farms a “Feast on Summer” with Ciboulette et Cie