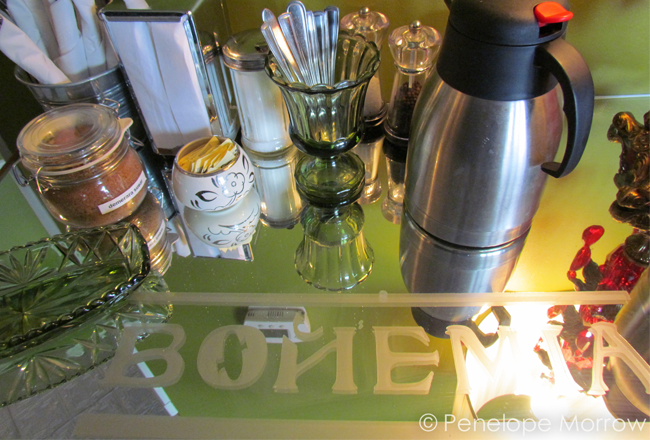 Soup and scones, two of my favourite comfort food items and Bohemia on Dunlop Street, does them both very, very well.

Once the weather turns cool, after our weekly Saturday morning jaunt to the Barrie Farmers market, darling daughter and I make our way to Bohemia to have our traditional post market lunch. Soups at

Bohemia are served in two portion sizes; “lunch” and “I am very hungry today”. 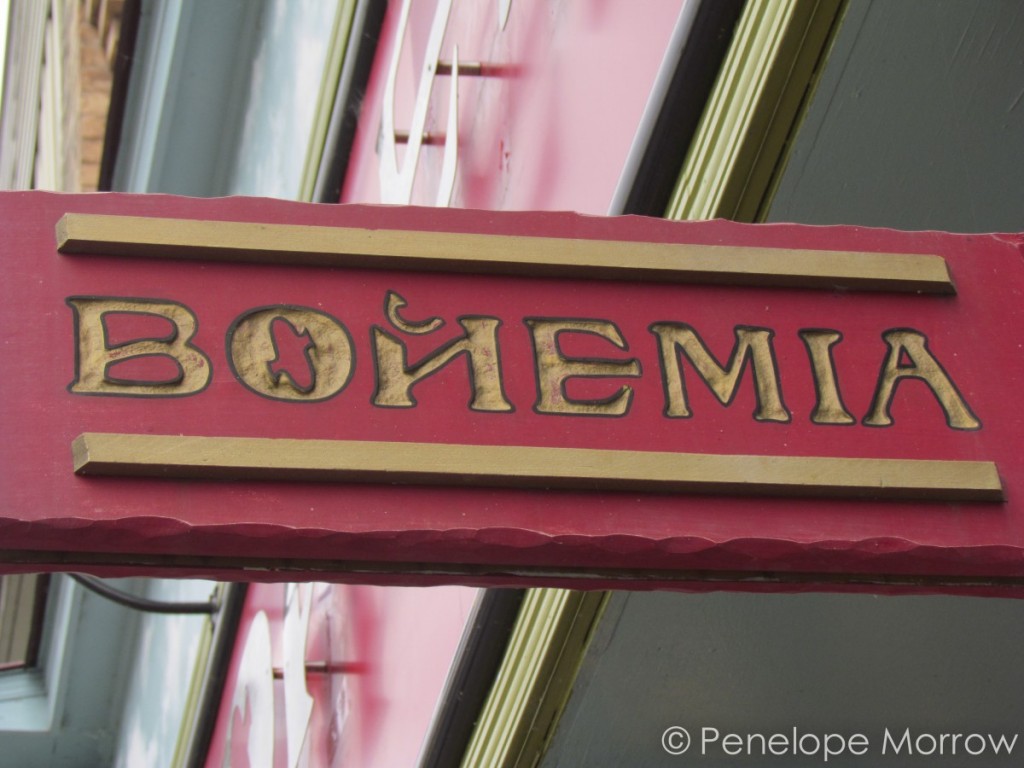 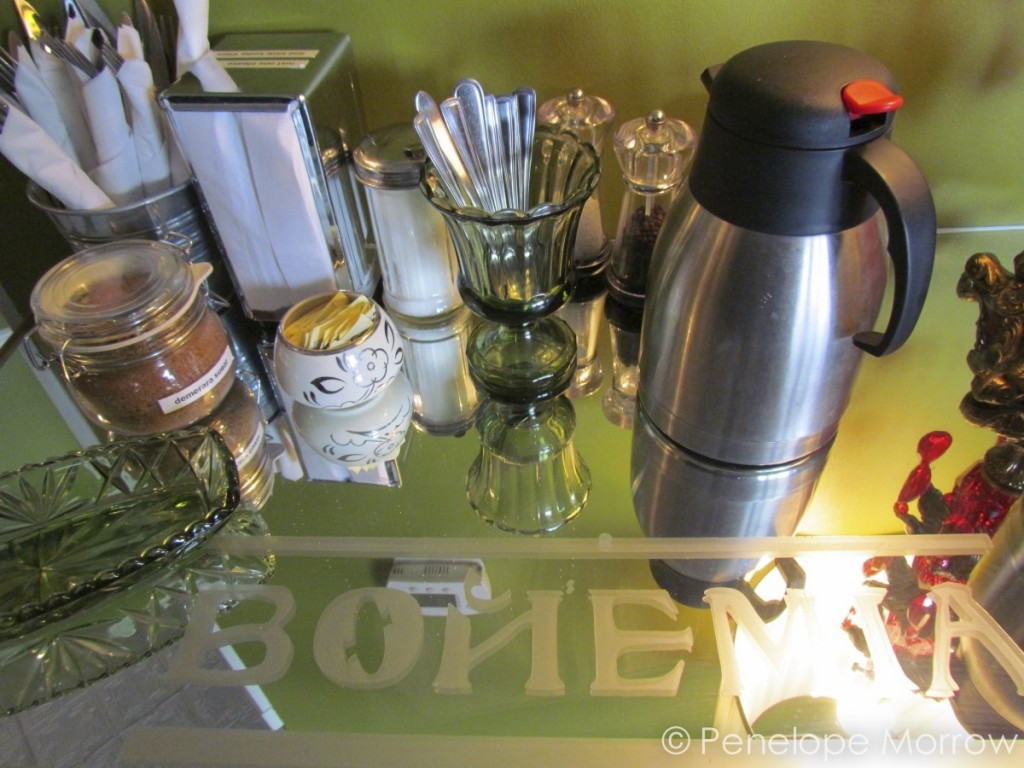 Jill Dyck, owner of Bohemia and I recently had the opportunity to talk in her newly renovated and expanded downstairs kitchen space at the main location, 125 Dunlop Street East.

I was charmed to watch her prepare another of my favourites, the yummy filling for the crabby croissant sandwich. This recipe is a classic, fondly recreated from Jill’s university years working at the Bistro Praha in Edmonton. It is real crab, not some imitation oddly coloured fish byproduct. Like every menu item on the black board at Bohemia, the first prerequisite is that the food must taste good. It is real food, as Jill would cook at home. Local and organic sourced items may be used, but Jill believes that fresh and tasty are the priority. Jill often purchases from her neighbourhood store, the Local Foods Mart, another one of my shops to stop at on a Saturday morning! 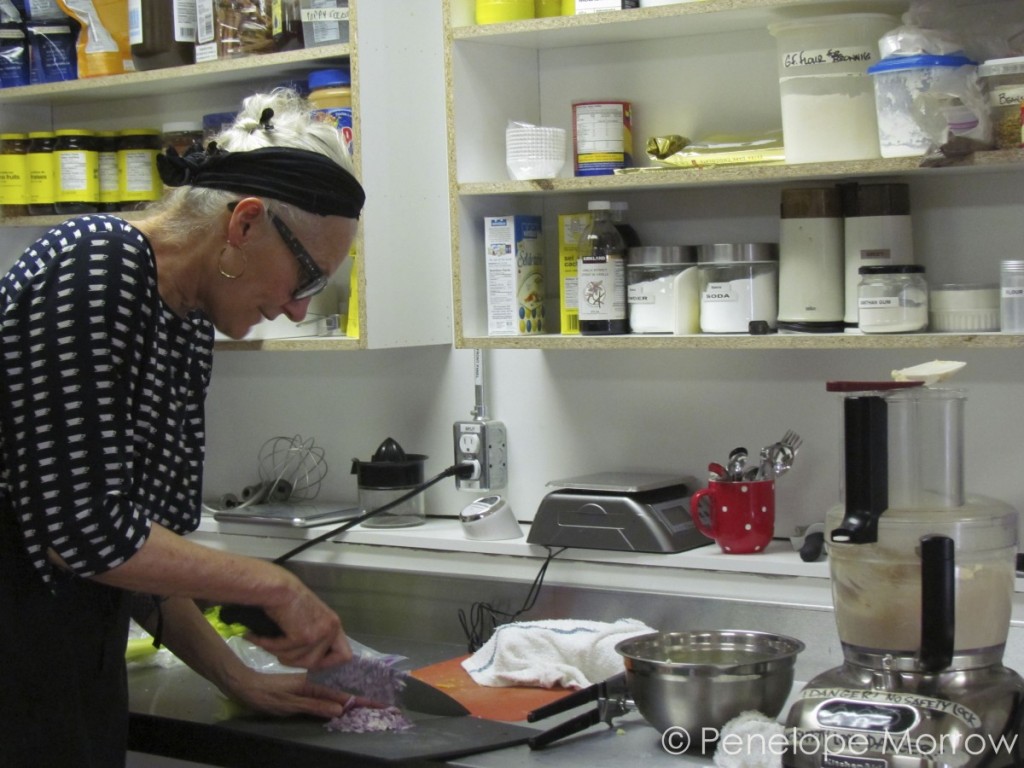 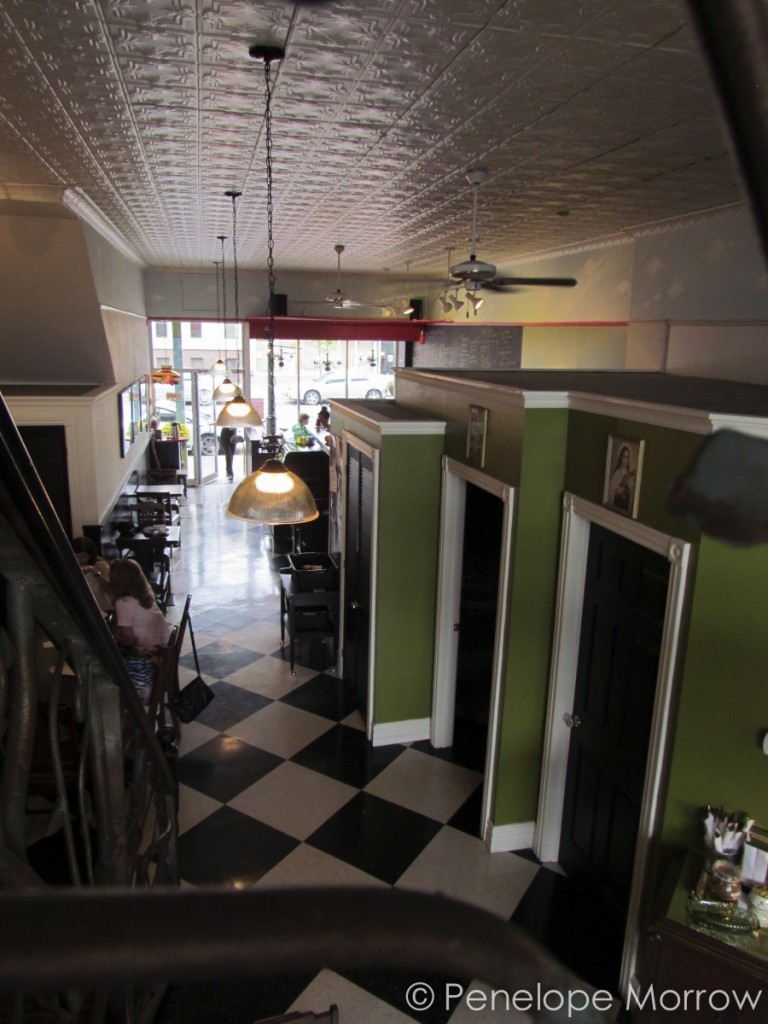 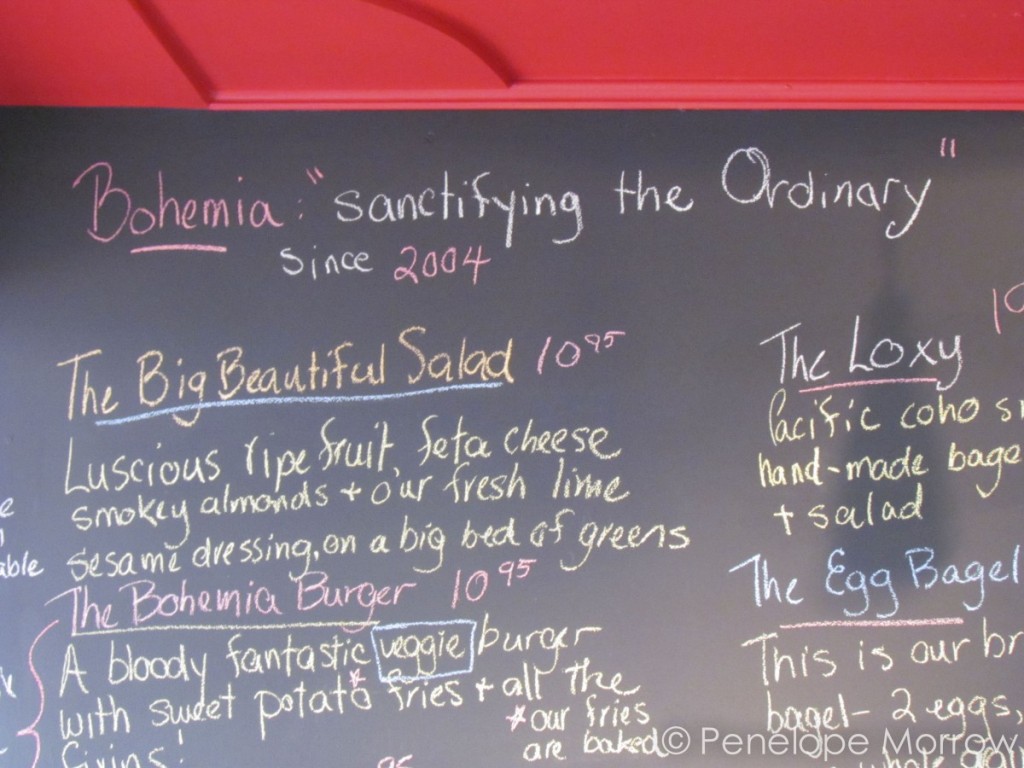 Tuna used in Bohemia sandwiches is pole or line caught, this being the more sustainable and humane method. This is as Jill describes it, humble food, made fresh from scratch in small batches.

Fair trade coffee has always been offered as it is the most delicious, “fairly” produced and prepared. Soups, salads, sandwiches and sweets create a solid, tasty and affordable menu.

The eclectic décor is part of Bohemia’s charm; With Jill’s strong visual sense and fine arts degree; she oozes style and originality. An original tin ceiling, stunning second floor railing, blackboard paint signage, combined with an earthy mix of tables and chairs, it exudes comfort and dissuades pretension. Local original art displays regularly appear on the walls, creating an atmosphere in keeping with the food, it too satisfies the soul.

Favourites from her own home create the cornerstones of the menu; meat appears as an accent, cheese is well placed in the menu items as it is a personal favourite of hers. Gluten free options are available, their brownies are so tasty, one doesn’t miss the gluten!

Wine and beer are now available at Bohemia, plans are taking shape for an evening dinner menu where they will be serving a simple but satisfying charcuterie tray, complete with cheese, olives, cured meats et al.

A long term customer once inadvertently provided Bohemia with their motto, “sanctifying the ordinary”, and Bohemia is about to satisfy more of us, as a little Bohemia is in the works, opening late this fall on Maple Avenue. This tiny shop will be filled to bursting with their fabulous selection of fair trade coffee and teas, fresh smoothies, and yummy baked goods…inserting a personal shout out for the scones here! 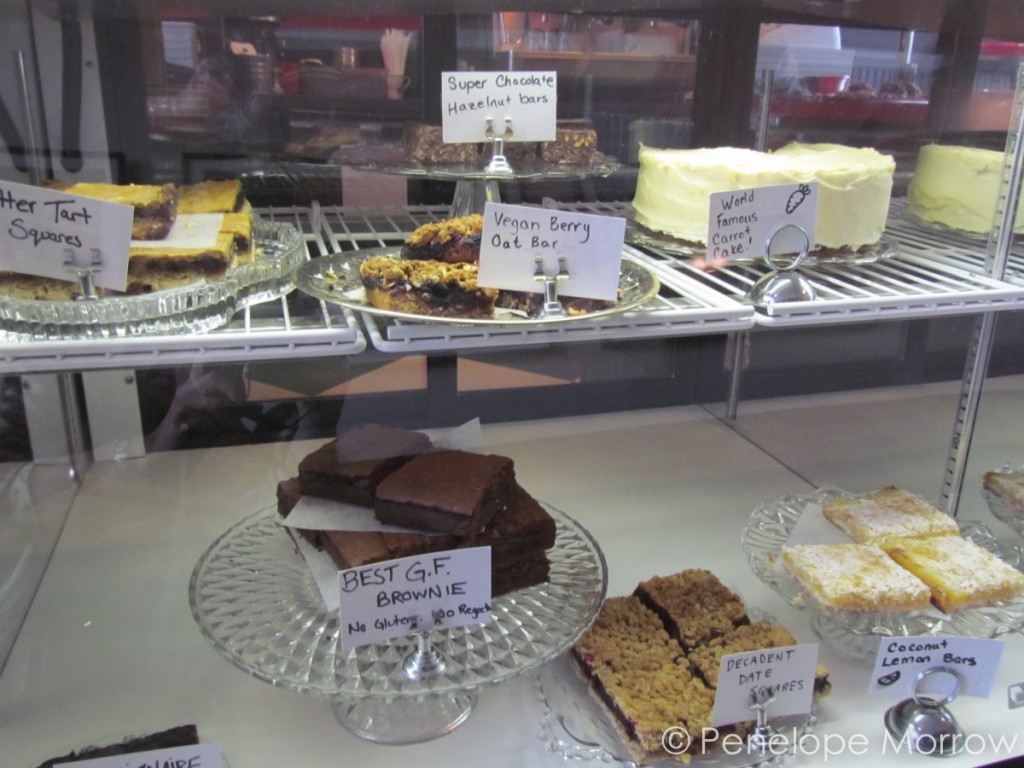 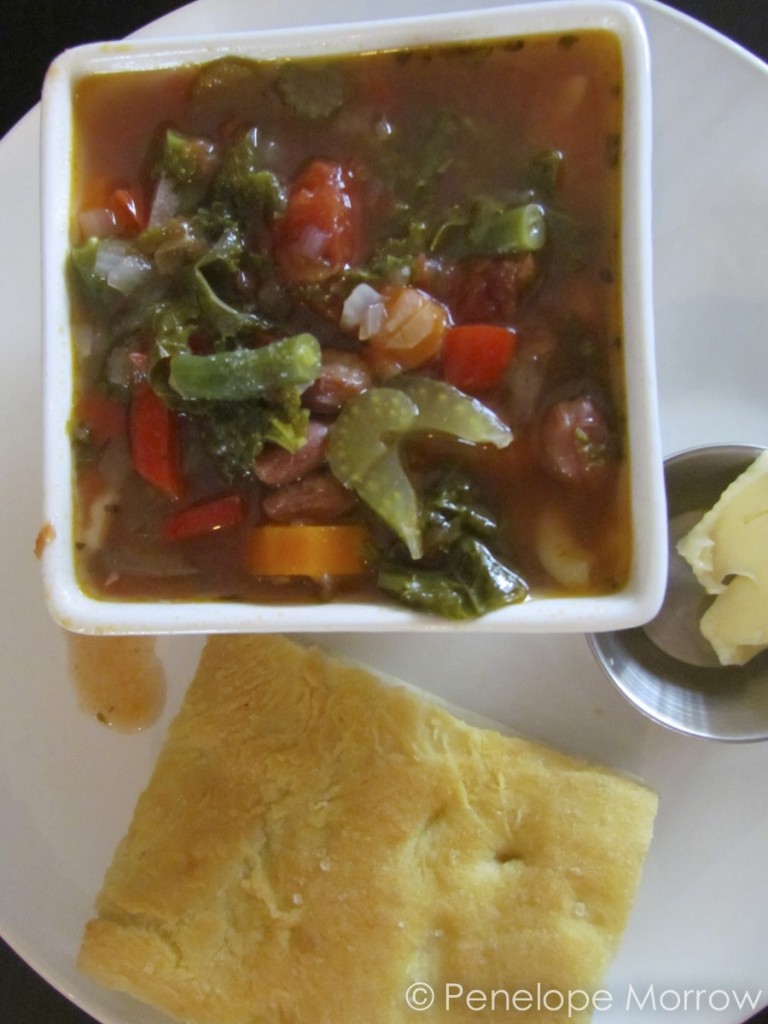 This will be mainly a take-out spot, as table space is extremely limited, with the Dunlop restaurant being the place to lunch, this will be the location for grabbing your morning sustenance or late afternoon pick me up.

This review was originally posted on Simcoe Dining in October 2013

Since my review was published little Bo, has come and gone, but, I am very pleased to share that Bohemia Café is holding delicious Friday Night Social’s with snack platters, specialty drinks and live music.