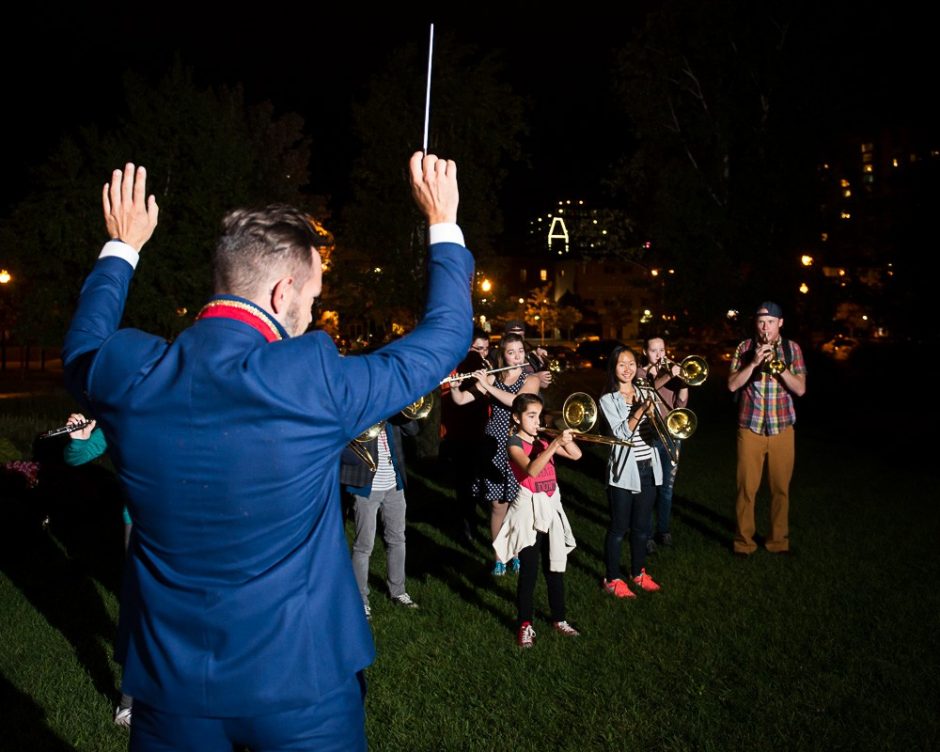 When a city is rich with cultural opportunities everyone benefits as arts and culture magnetically draws business and investment. Barrie has a growing downtown core; at the crossroads of the historic Five Points sits the Mady Centre for the Performing Arts, the usual home for productions by Talk is Free Theatre.

Experiencing the theatre is immensely different than attending a theatrical performance, this isn’t just semantics.

When the performers are mere steps away, the backdrop isn’t painted canvas but familiar locales in the city I stride through daily, it blurs the lines.
My toehold on the expected was purposefully trod upon, that is the intent of the production of The Music Man, recently found, literally on the streets of Barrie. 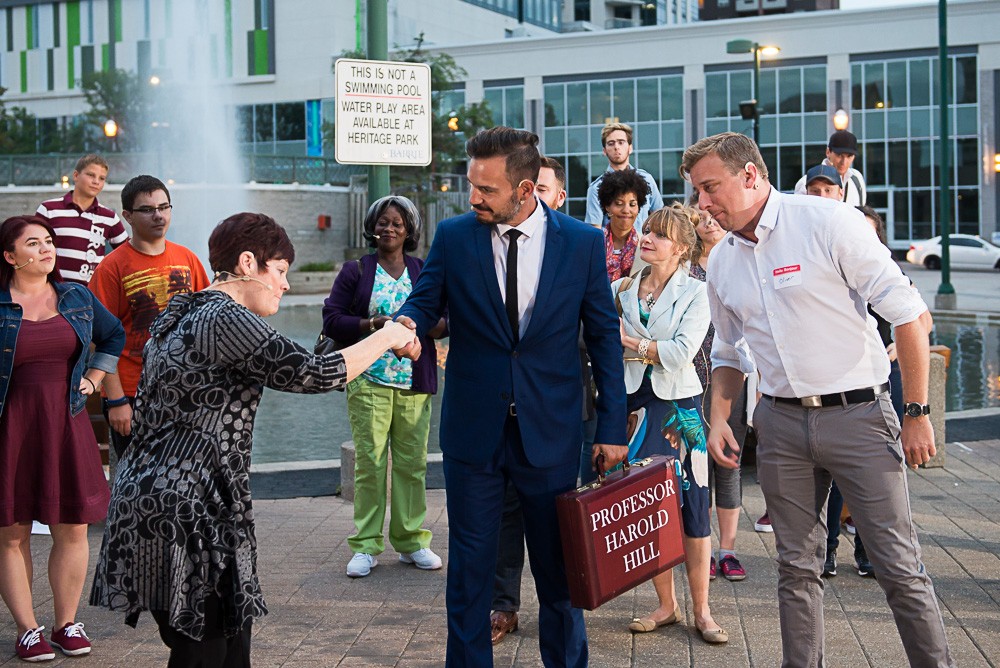 They call it a site-specific immersive production. Step along with me while I share my experience.

Many readers may be familiar with composer Meredith Willson‘s musical; this version is true to tale but with a twist. The time is present day, the performers a mix of professionals and non-professionals, the tone is exceedingly practiced.

Ticket holders exchange their city residency at the bus terminal on Maple Street, passports not required, but we were made honorary citizens of River City. Regular Barrie folk stood waiting to board buses, when amongst the crowd a measured beat of familiar tune began on unconventional instruments, song followed, dancers stepped up and leading man Harold Hill slid into character. 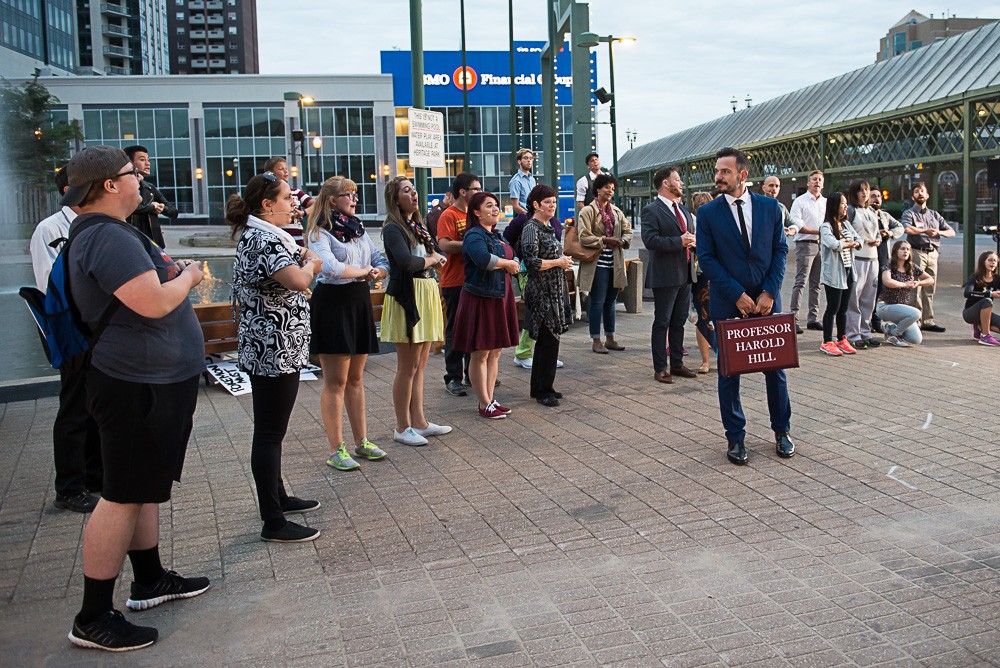 We followed. On foot, by bus, traipsing in the dark humming softly, we were capably escorted into this altered world. 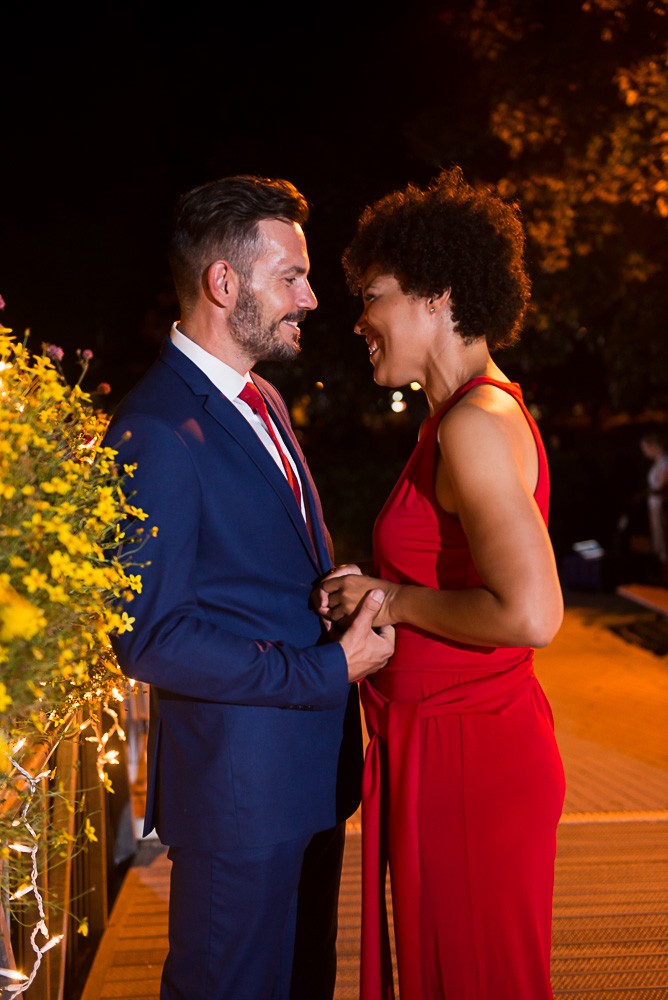 When the weather shifted so did the settings; performers, crew and attendees took it all in stride.

Playing with my perceptions took realignment; when familiar locations are professionally lit, I questioned is that the hair salon entrance or a comfy porch where a student receives her piano lessons? 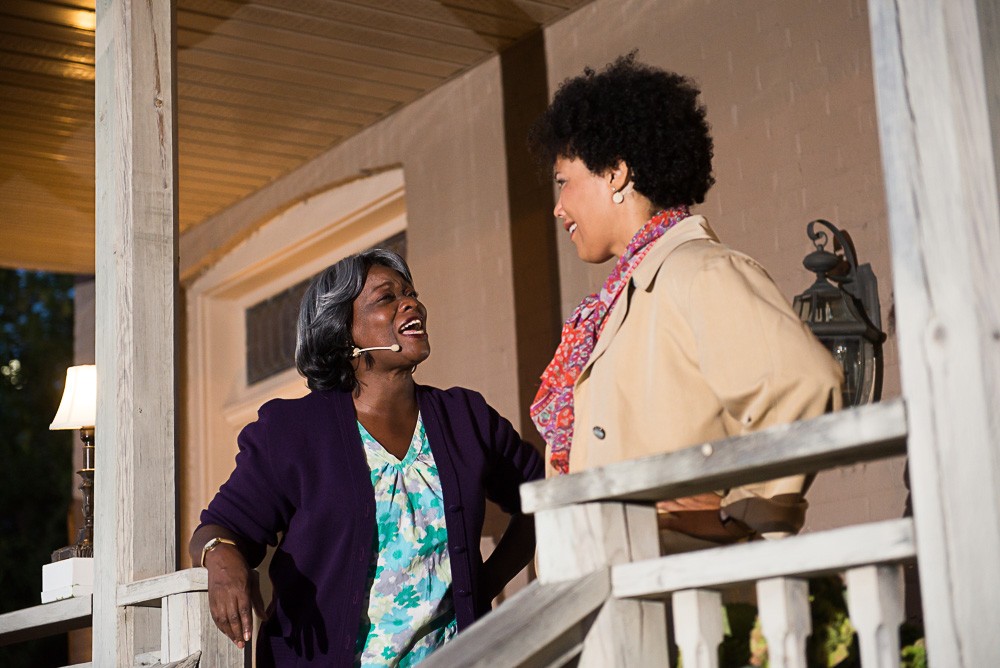 Perhaps that could be a reasonable rendition of a council meeting, I’ve heard there is a heap of talent right here in River City, but we aren’t looking for trouble. Seventy Six Trombones that music sets my feet to tapping! 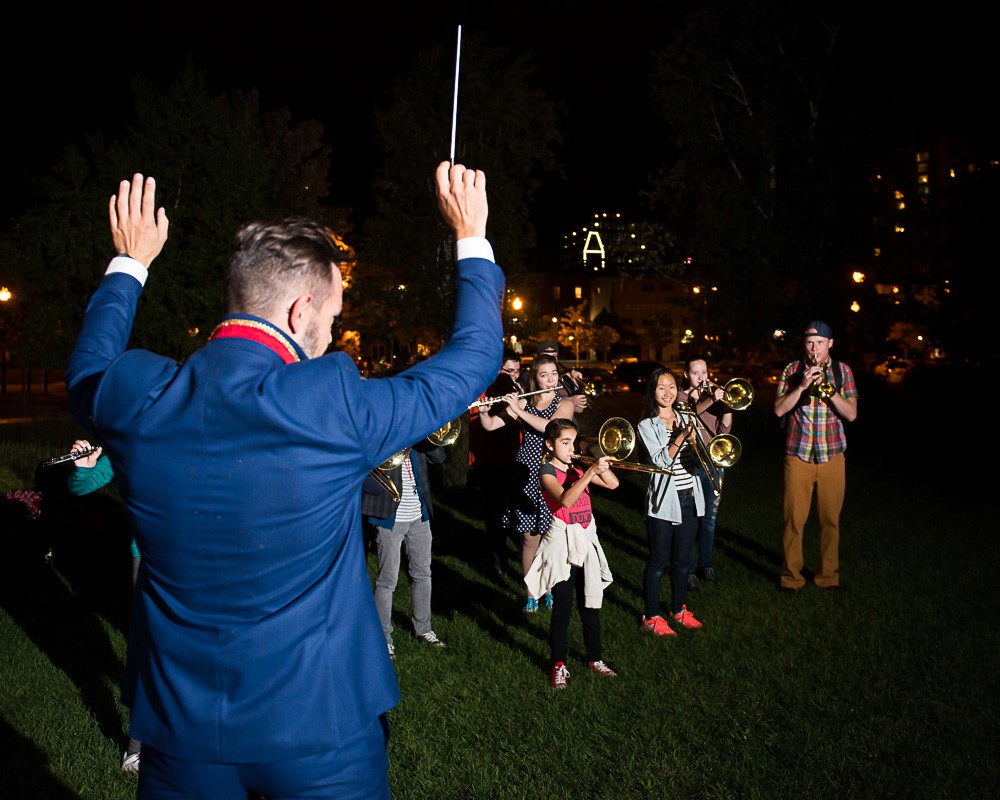 It was a fascinating fishbowl experience. I was immersed in the performance while simultaneously watching non- ticketholders and the pedestrians of the cityscape taking it all in too.

In our conversation, Arkady Spivak, Artistic Producer of Talk is Free Theatre told me this is to be expected.

Is it usual for Talk is Free Theatre to do a production that combines out of town performers with locals?

PM: I would think this would be encouraging for more people locally to come to the theatre.

AS: Well absolutely, I mean it’s not just to come to the theatre but to learn what theatre is about, how production is made, how professional production is made because it’s not necessarily quality we are talking about. Not that professional is good and non-professional is bad, but it is a different approach, a different discipline. Different timelines too in this case, the project had to be developed in three and a half weeks as opposed to three months.

PM: Who is your typical patron?

AS: Our typical patron, well that’s a very good question. A typical patron. We are trying to run a very non-elitist organization so while we have very affluent members of the community who attend and support us over and above their tickets, we don’t really go younger than high school. We do shows for high school, we have younger adults. A lot of disposable income isn’t really a question in our case because tickets are anywhere from 35 to 40 dollars. Where the same kind of people, same kind of actors and shows get that elsewhere for which people have to drive two hours and spend 150 dollars for a ticket. We have supporters who drive busses for City of Barrie transit, all the way to very acknowledged business community leaders in town, everything in between.

PM: Does having a performance that takes the theatre to the people, off site, break down any barriers with the preconceived notion that some people have that theatre is elitist?

AS: Oh absolutely that’s exactly why we did the project that way, one of the main reasons. I always envy visual art because the Sprit Catcher for example, you can install it, it lives inside of everyone for a very long time, you might have some maintenance but in the grand scheme of things you don’t have to create it every day. Whereas what we do in theatre is living art, which means it is extremely short duration. It is very difficult to take it right to the people because theater requires lighting, sound, seating. A certain way people are accustomed to, they get dressed up a bit, have a glass of wine, get seated, no wind, no rain. This kind of throws it all out the window really. Basically says performing creativity can happen right on the street without you knowing. Satirize the idea we are all characters with wonderful stories to tell. It might be your story but at this point we are watching someone else’s story. While it was written in 1957 and set in 1912 we are saying it is happening today and today only.

AS: That’s exactly the intent and thank you for saying that, because somebody asked me what stops you from watching it for free and not buying a ticket. We have a system in place, you may glimpse some of it, you may be able to see something but not as close as an audience member and if you come closer or go to the library at the time we are doing those scenes you become part of the chorus without even knowing.

PM: What is your vision for Talk is Free Theatre moving forward?

AS: In terms of an impact I would like to see professional actors, in this case theatre makers, obviously right across the discipline of art making, be it visual artists, musicians to relocate to Barrie and to create here. It’s not that I’m against bringing people from elsewhere in the province or the country or even internationally, but I think they shouldn’t be blowing through here like breezes, they should be committing to their community as a lifestyle because this is what will make, what will transform the city is specific people living and working here. As opposed to a certain kind of work that is here. I would like and I think that is happening. I would like to prepare the environment; to trigger the environment for this to happen, because it is specific visionary people who create work in this community because them being here will immediately filter to mentorships of younger people, helping the community realize itself through a certain beautification of downtown.

I will close with a quote from our interview that resonated with me well after we spoke, “Only art can help us chart the history of this community, nothing else”.

My sincere thanks to Arkady Spivak, Artistic Producer of Talk is Free Theatre for sharing his time and insights.

*Interview abbreviated due to space constraints

*All photographs taken by Luca Ragogna