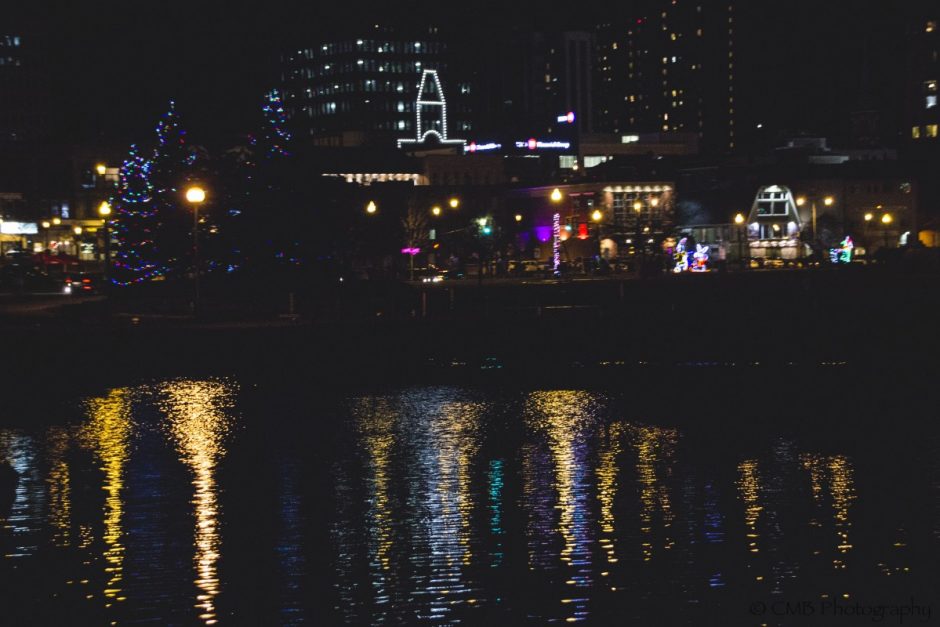 ‘It’s actually kind of sweet, all the energy on the street’; I overheard this comment as I walked along Dunlop Street, carefully dodging busy little boys passing time practicing their slap shots with plastic pucks and the tiniest of hockey sticks.

My daughter and I shared a knowing smile as that comment was bang on accurate. I wanted to shout out ‘you got that right!’

Parents carried blankets, folding chairs and umbrellas while vendors peddled cotton candy and glow sticks. A soft rumble of predictive weather discussion prevailed, but the crowds were here for the duration.

A pop up booth dispensed hot chocolate in exchange for donations to the Tim Horton’s Food Drive and the Rock 95 & Kool FM toy drive. 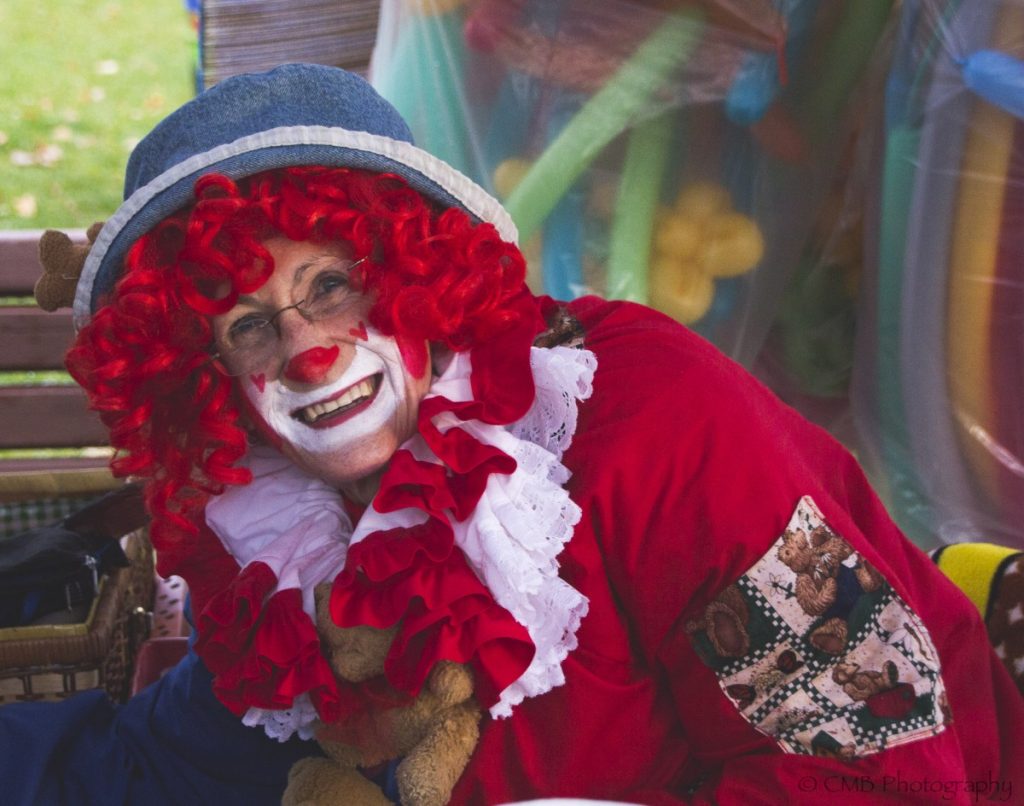 Amusements were many; a seasonal film was shown on an inflatable screen, clowns provided face painting for the little ones, while two majestic horses steadily plodded along Lakeshore Drive, wagon in tow, to the delight of all ages. 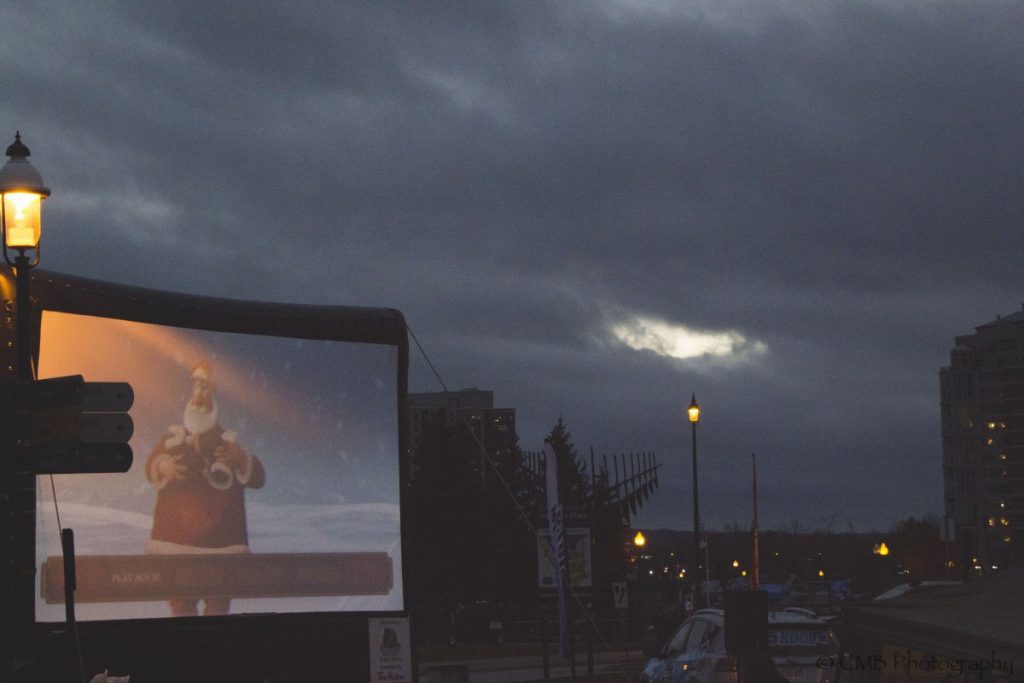 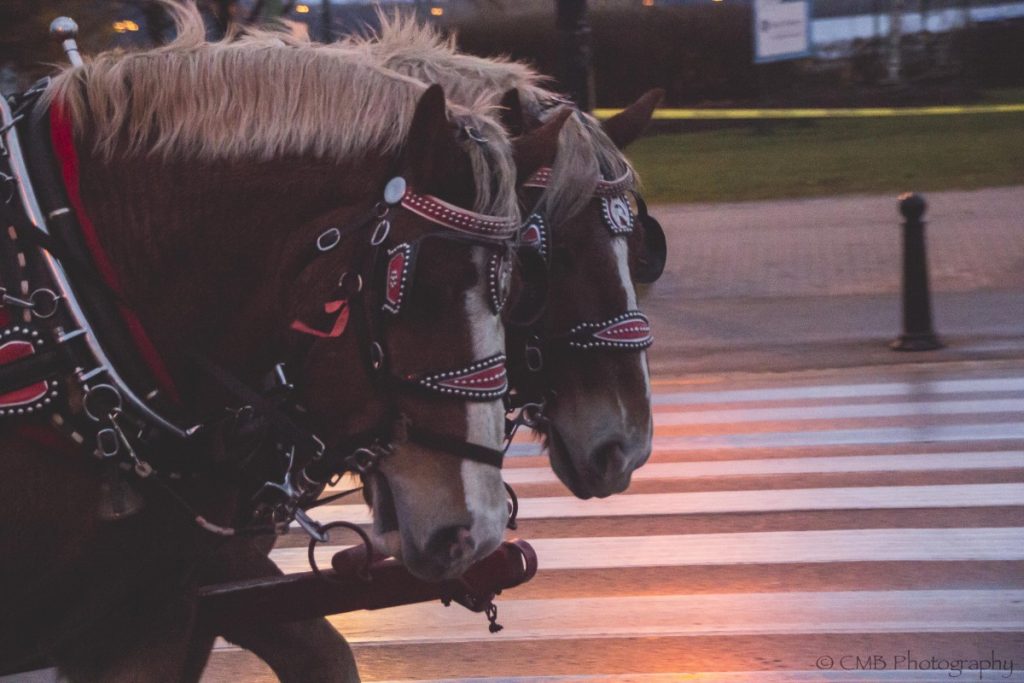 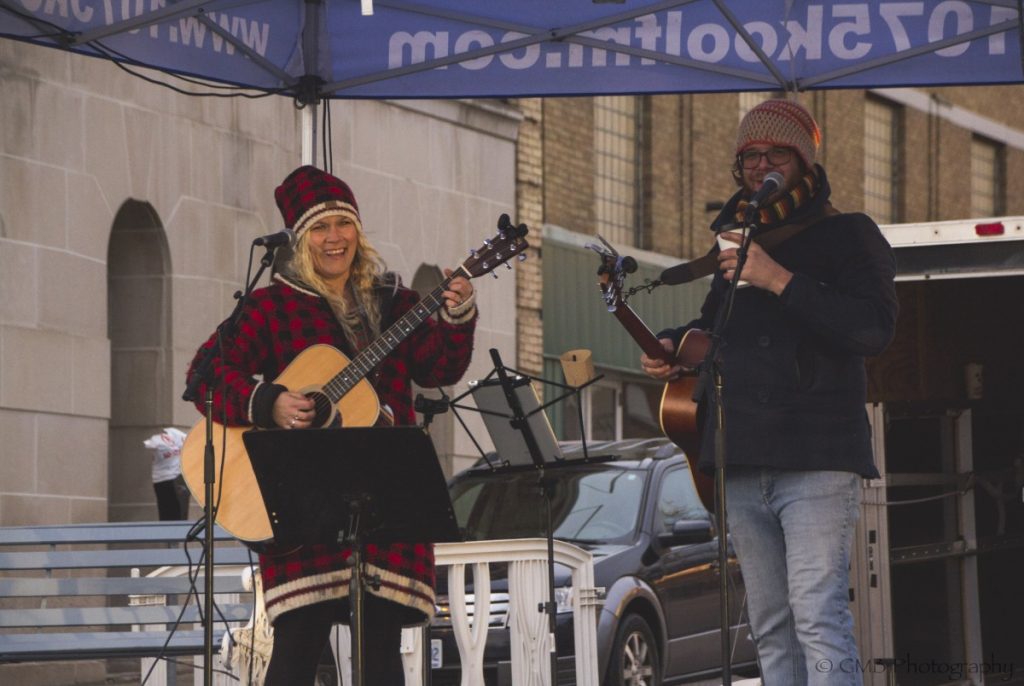 Country musician Dani Strong and Barrie’s own Brett Caswell, singer songwriters both, were tunefully engaged with the growing audience as they provided an acoustic set of crowd pleasing Christmas season favourites. With frozen fingers nonetheless!

With the street blocked off, it was easy to meander back and forth while admiring window displays. Many merchants participated in the themed window decorating contest “Christmas Around the World”. Congratulations to Barrie Olive Oil, first place winner, J’adore in second place and Angie’s Outdoor in third. 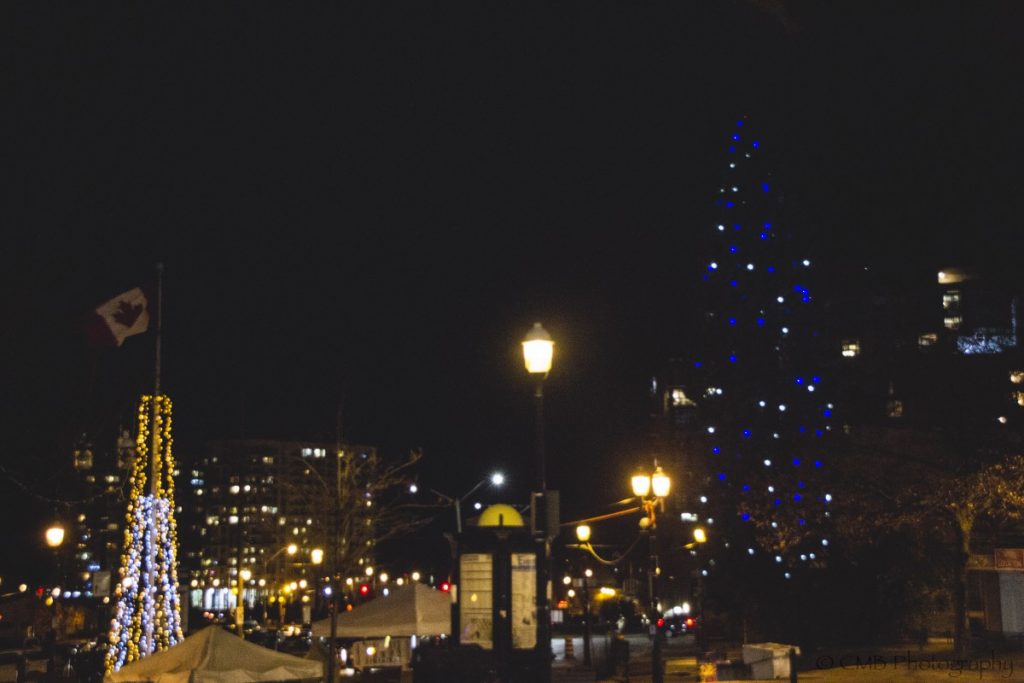 This annual festival known as Noella kicks off with a blast of colour and carries on until New Year’s Eve.

Tonight’s activities encompassed the magic of the Tree lighting Ceremony in Memorial Square, a traditional Santa Claus Parade hosted by the Chamber of Commerce, the enchanting Rotary Club of Barrie Festival of Trees and the fireworks finale from the City of Barrie.

We were well positioned for parade viewing, having secured a patch of sidewalk for myself while photographer daughter wandered to aim for best shots. In a flash the town crier raced past, the skies opened up and down came the rain. 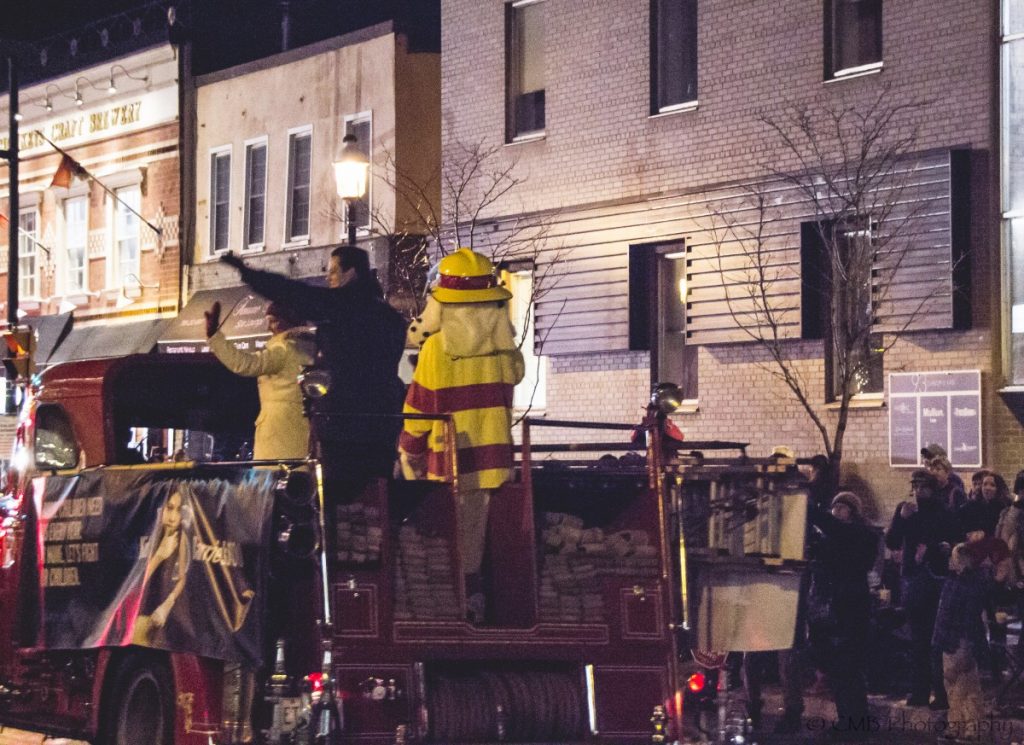 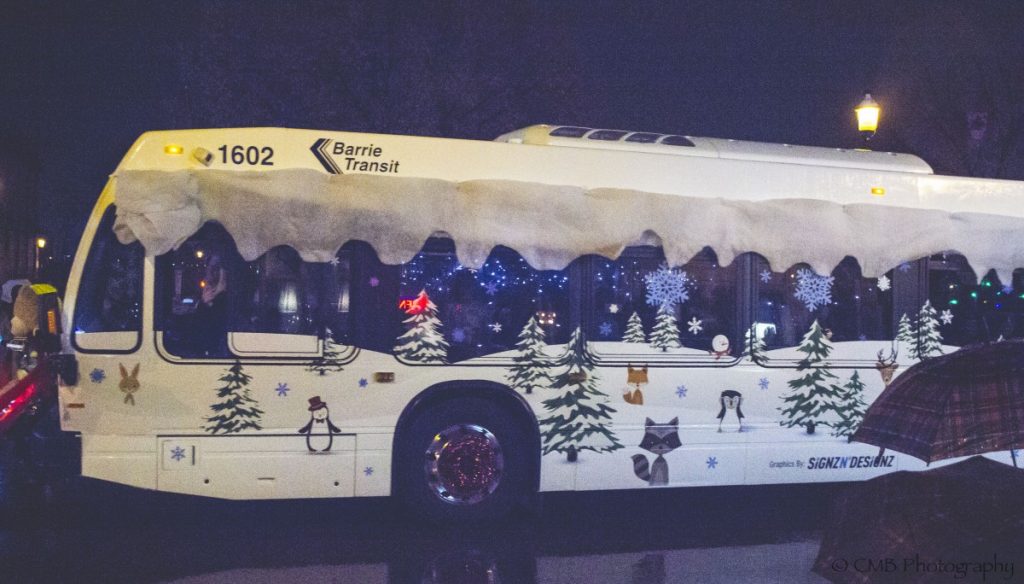 We watched the passing of penguins, nativity scenes, tropical paradise, trucks and Jeeps, Boy Scouts, bagpipes with marching band, steel drums and horseback riders, all the while, the rain dripped down. 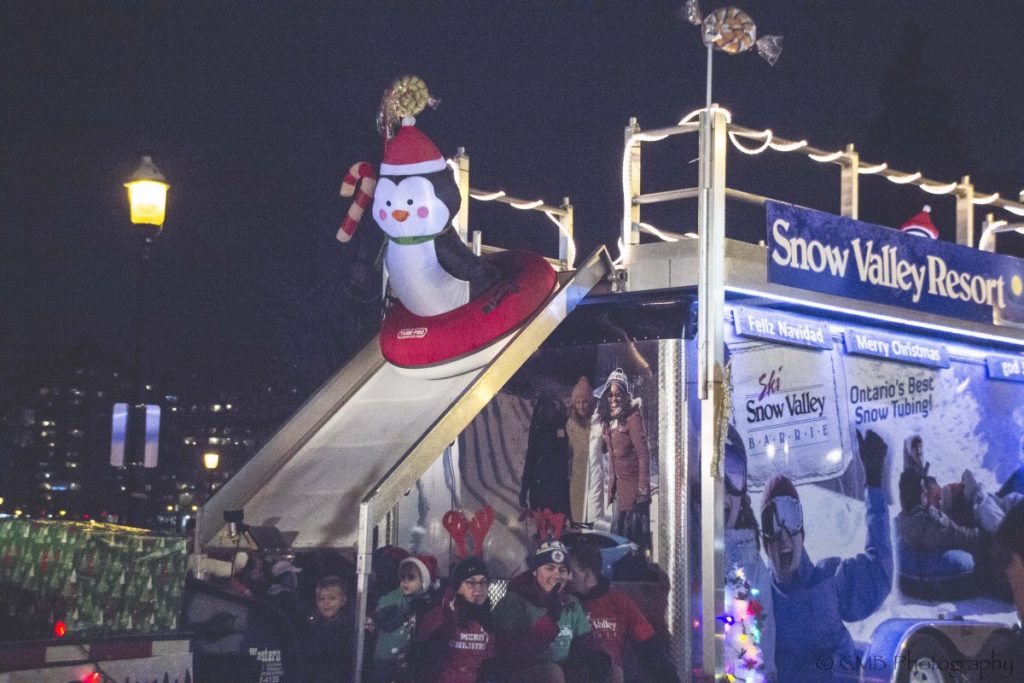 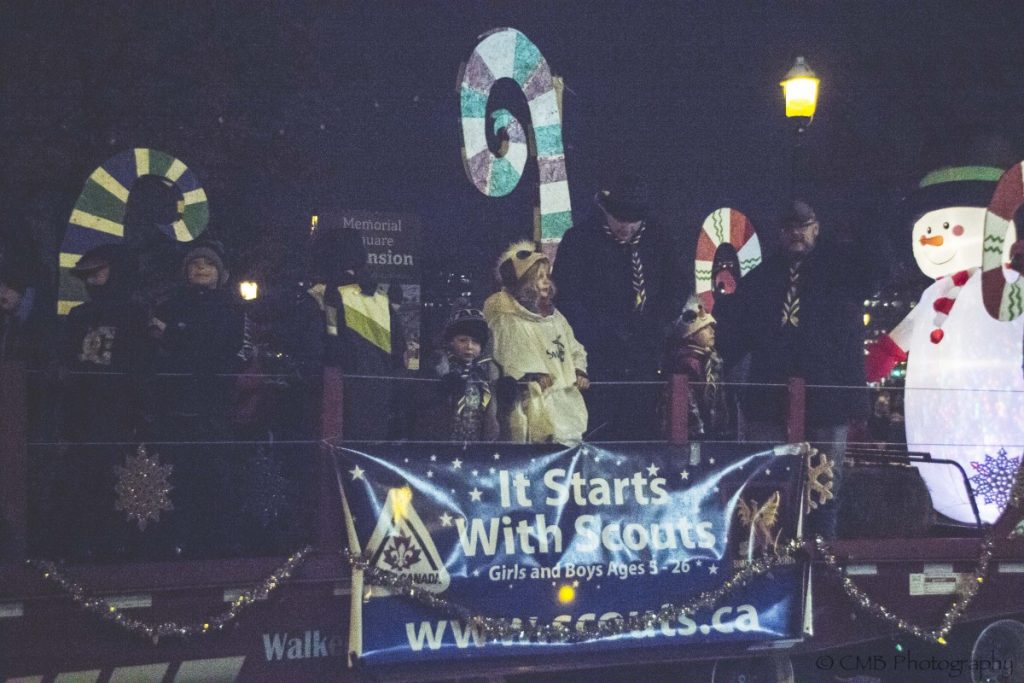 Base Borden brought the heavy equipment festooned with lights, the Barrie Police presented some of their finest as did the firefighters. 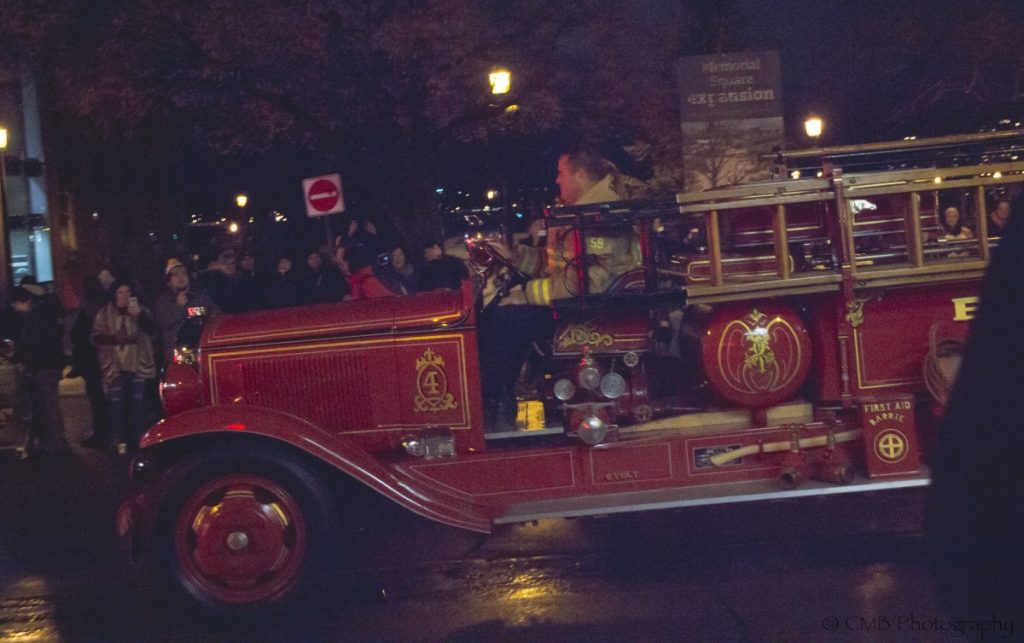 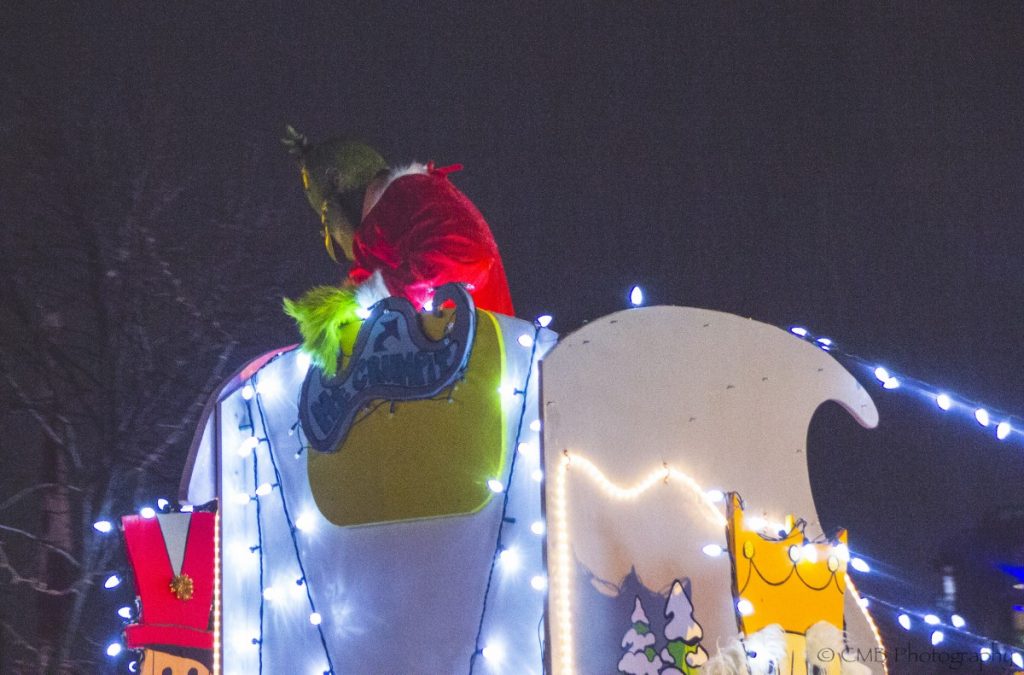 Some snowmen were dripping, the Grinch looked a tad greener than usual, but aside from a few soggy smiles and shivers from the youngest of float riders, the parade kept us all captivated.

Great fortitude and enthusiasm was shown while waiting for Santa to arrive! 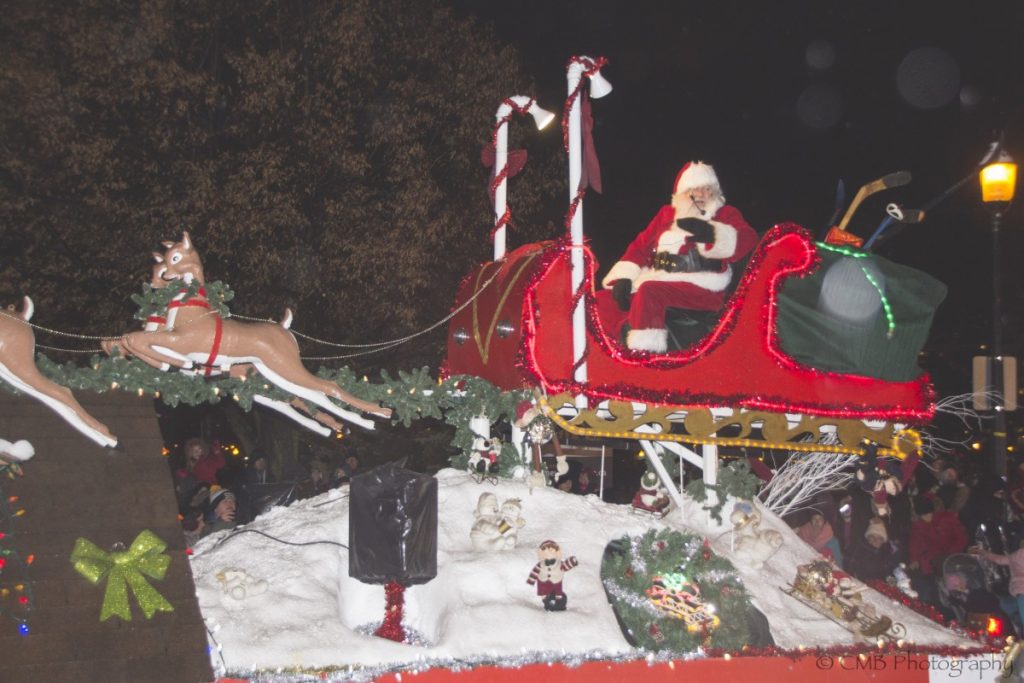 Then the magical moment happened; with reindeer prancing, the man in the red suit cheerfully waving while shouting out ‘Barrie is such a wonderful city to come to’. Santa got that right! 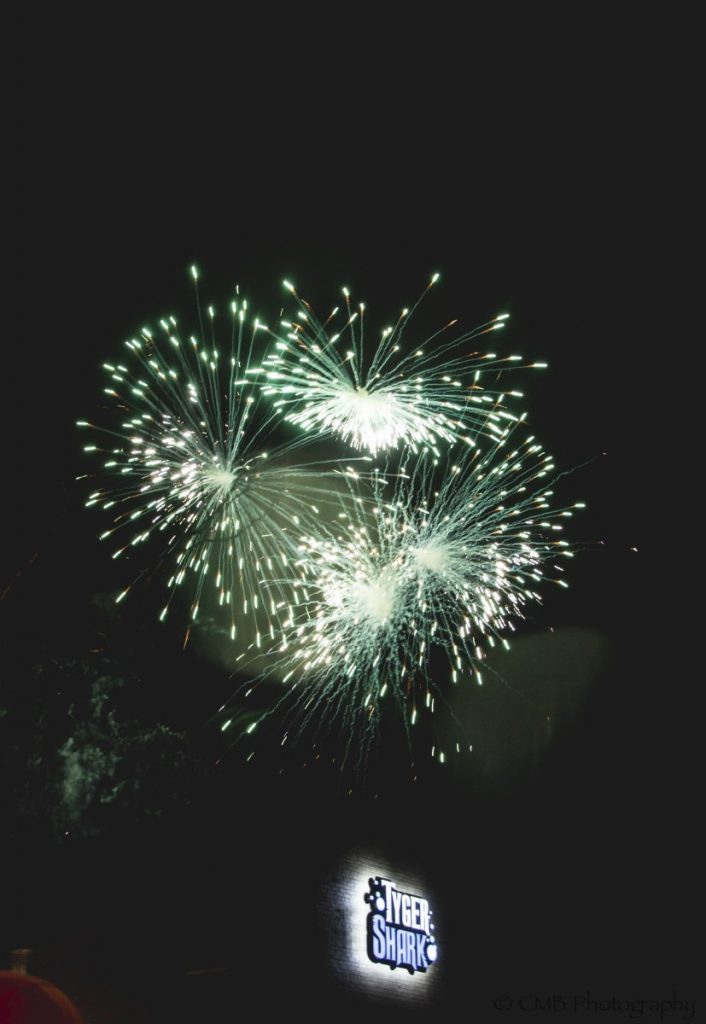 Downtown Barrie is a fabulous place, a community brimming with ‘sweet energy’.

My thanks to Cyndi Taylor at Canvas & Cabernet for welcoming us to take a place at the window seat and thaw frozen fingers round a steaming hot toddy, a great antidote after hours in the pouring rain. I suspect the downtown Barrie merchants are on Santa’s nice list!

There is more to explore on the Noella menu, check it out! http://noella.downtownbarrie.ca/ 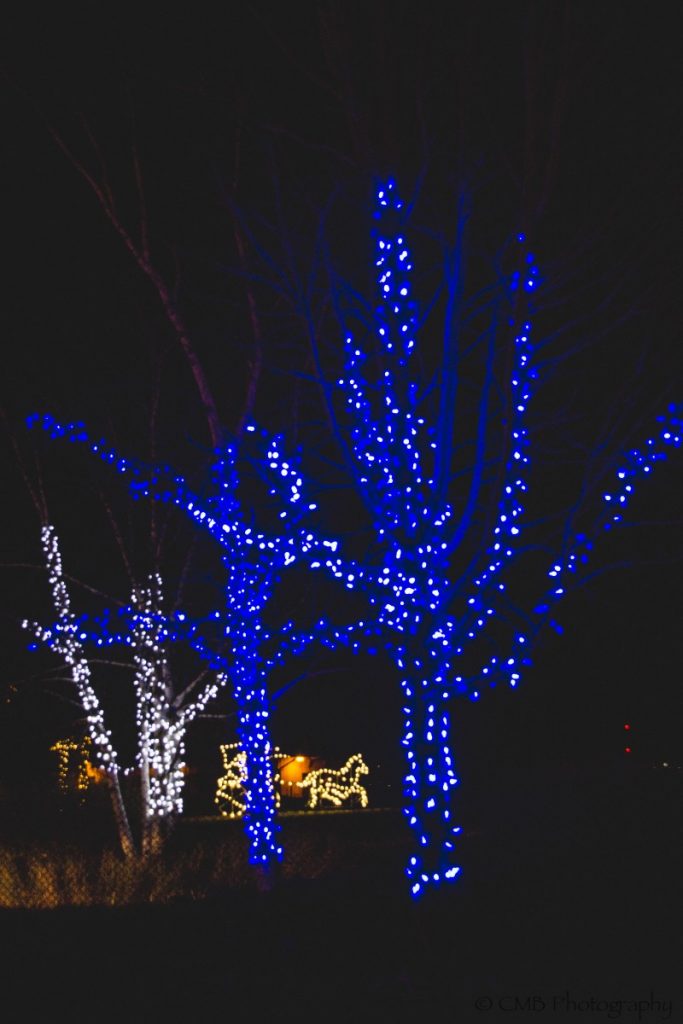 There is only one more month on the 2016 calendar, December fast approaches.

Erin Corcoran; Re/Max Chay Reality Inc. Sales Representative and enthusiastic owner operator of Barrie’s Simcoe County Shop Local and I hope you have been enjoying our collaboration of “Barrie through the Seasons”.

Next month I will look back over the past year with interviews and photographs to explore what supporting local means to others in our community.