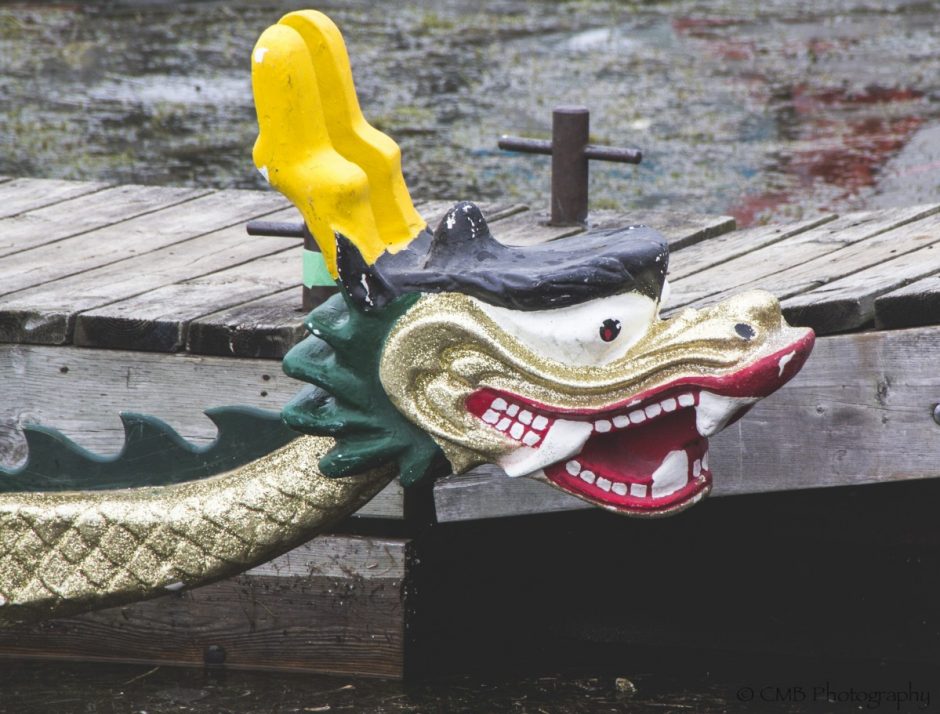 Barrie cares; two words that are a call to action heeded by many for numerous causes in our city. Local government and corporate sponsors add donations when budget planning, small businesses support local campaigns with innovative style and residents regularly reach into their pockets. Each in our way encourages and supports the creative challenge of contributing.

I saw this at the 14th annual Dragon Boat races on Saturday August 27. I felt it.

The enthusiasm of Erin Corcoran; Re/Max Chay Reality Inc. Sales Representative and enthusiastic owner operator of Barrie’s Simcoe County Shop Local with whom I am collaborating to bring you Barrie through the Seasons was the impetus for this August review. 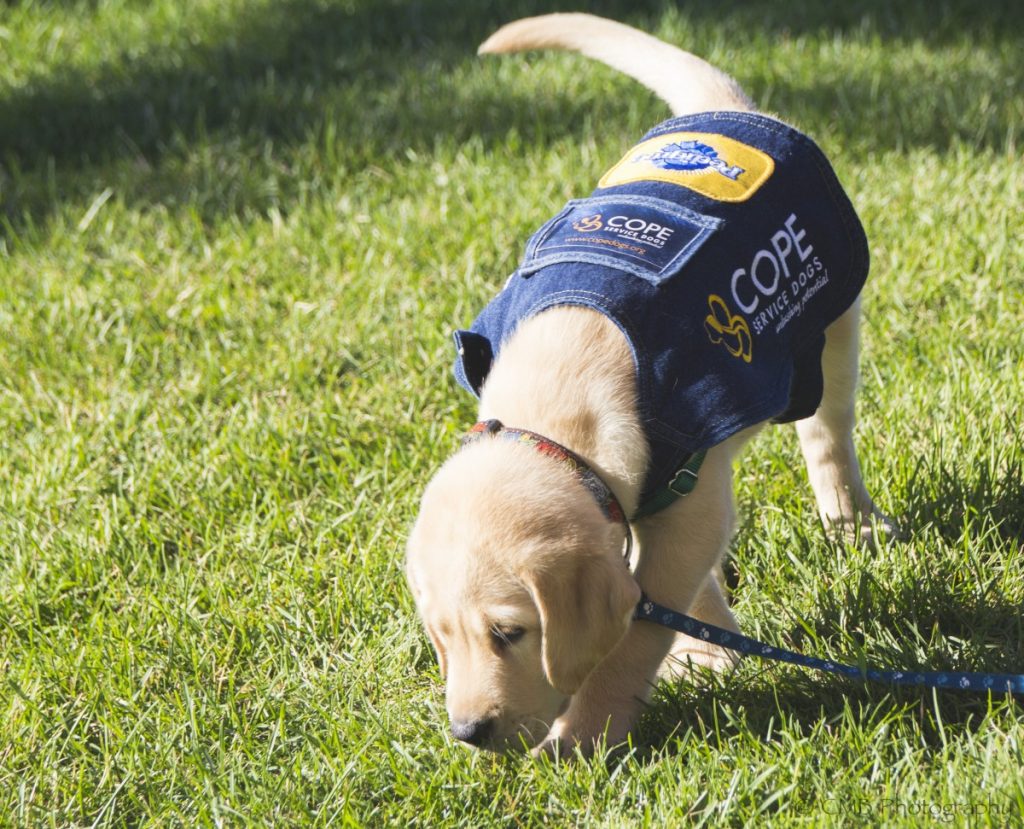 While learning about the Dragon Boat races I snuggled a seven week old puppy that is in training to become a service dog for an individual in need of assistance with mobility challenges. The specialized training costs over $30,000.00 and takes approximately two years. In the process this pup will touch the lives of approximately forty people; with his foster family, school partnerships programs, as a reading buddy in elementary schools, a visitor in senior’s homes. This will assist the adorable golden retriever to develop socialization skills before he is paired with his permanent partner. 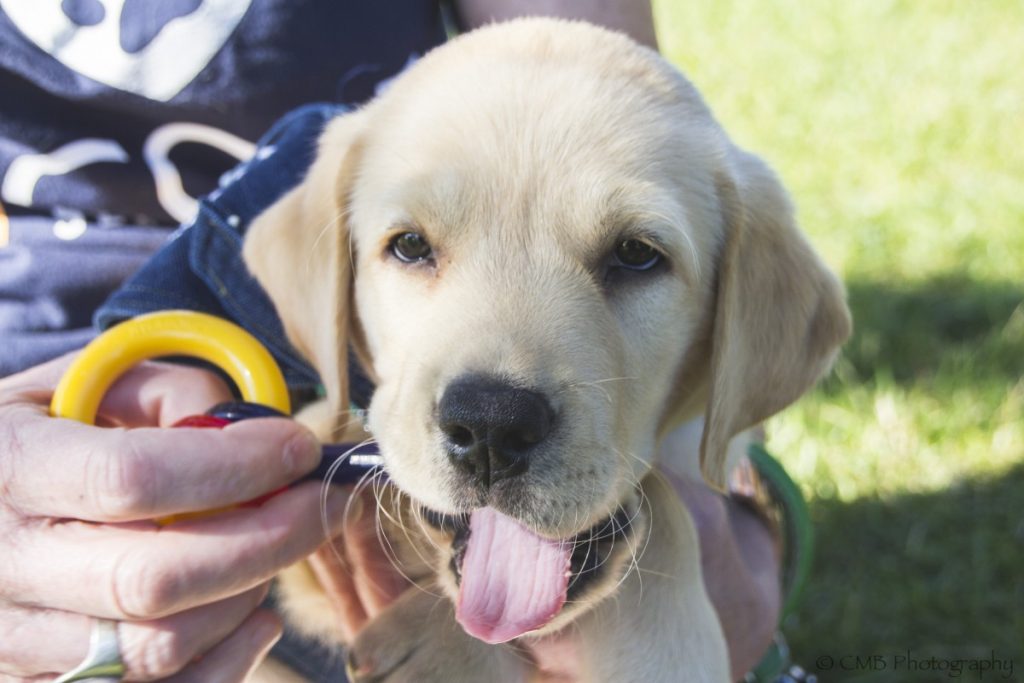 Training is expensive, his responsibilities are extensive; this pup will be more than a companion, he might be a life-saver.

Energy was the word on race day, many teams engaged in warm up exercises, although some looked as if raising a coffee mug would be more their style on a Saturday morning, they were here and committed to their team.

Over fifty five teams from Simcoe County and beyond participated this year, raising over $102,000.00 for their charity of choice. The Haliburton Highlands sent a crew, to me this exemplifies the spirit of race, where communities comes together to raise money, network with others and have fun.

There were moments of strong emotion, enthusiasm and exhaustion. 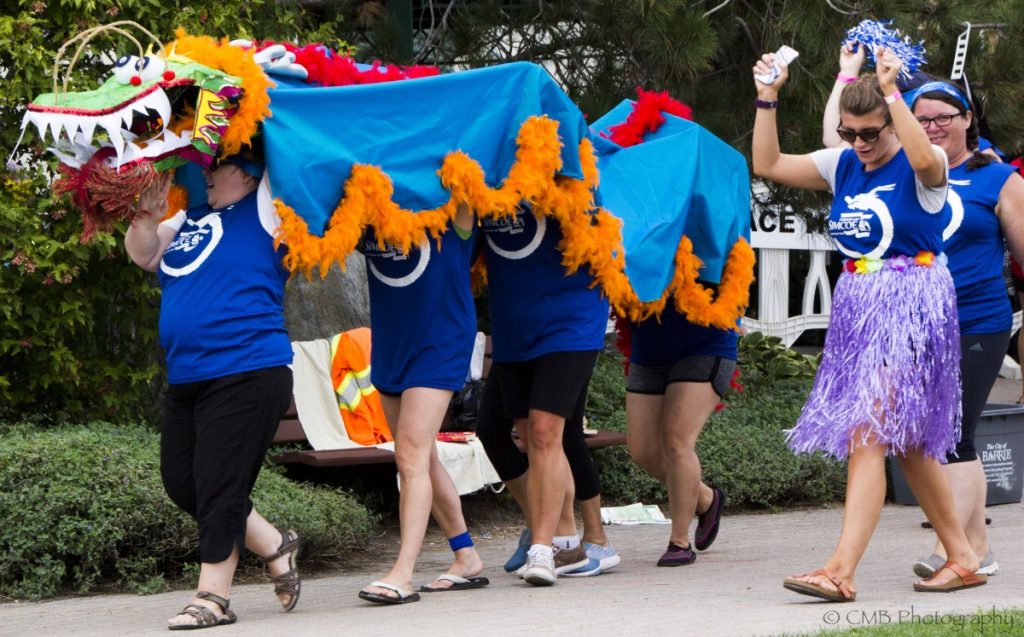 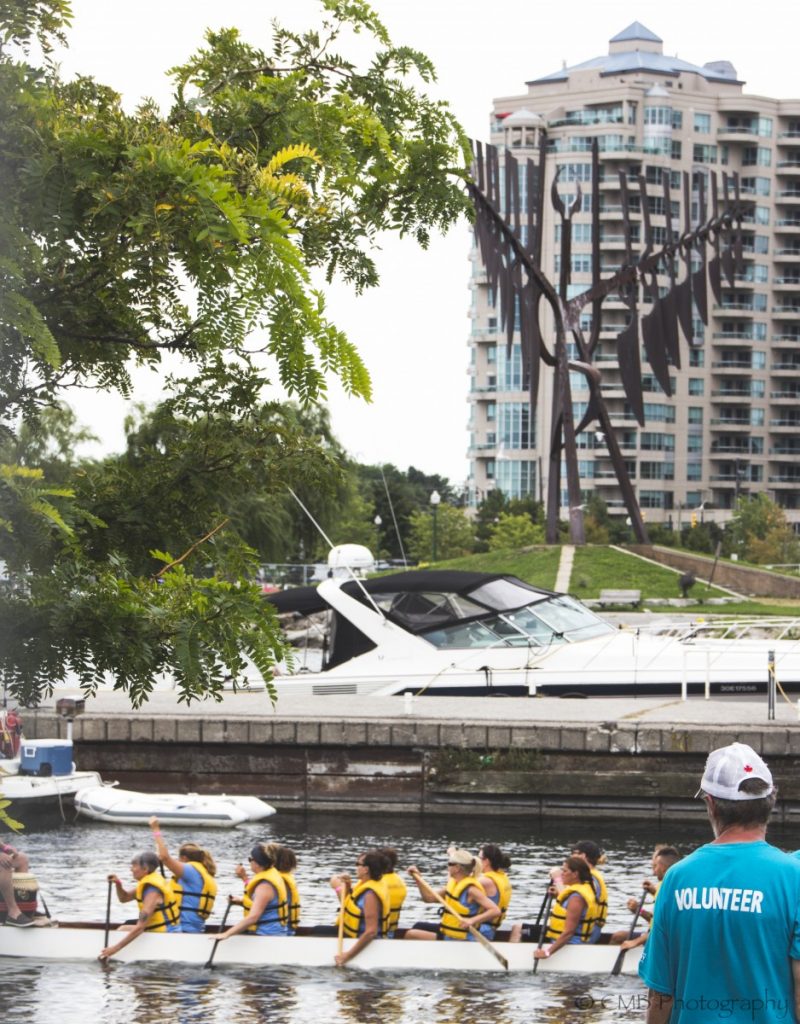 I asked Erin Corcoran about her motivation to become a Dragon Boat team member for C.O.P.E. (Canine Opportunity, People Empowerment), and her response was immediate, “because its dogs and it helps both kids and adults”. Although she has been assisting C.O.P.E. through social media and fundraising for a few years, this is her first year in the dragon boat as a paddler.

Erin is inspiring, her enthusiasm is contagious. I asked some of her boat mates what inspired them.

Erin’s sister-in-law and team mate Arlene Macleod, a Child and Youth Worker joined “to raise money for a good cause”. While friend Darren Lavigne jokingly claimed he was “threatened and feared Erin would defriend him on social media if her refused her request”, but quickly added that his commitment was “to have his kids see him participate in something for charity, to teach them the value”. Another team member chimed in with “they had me at charity”. 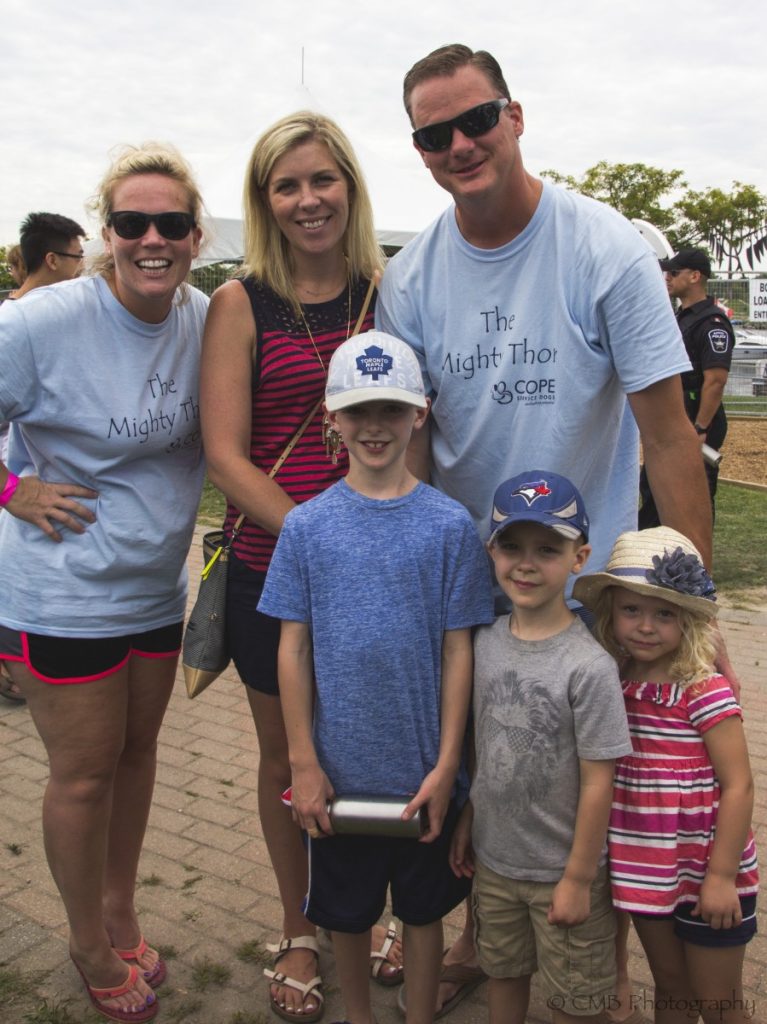 The collaboration between the Barrie Public Library and the Dragon Boat has been buoyant for 14 years, bringing community together for fun and fundraising. Katherina Symes, Community Fundraising and Events Lead for the library shared with me that planning for the 2017 event has already begun and will include ways to celebrate Canada’s 150th birthday.

The event has many sponsors, but special credit must be mentioned for the lead sponsor, Tim Hortons.

A shout out to volunteers is in order too. Katherina Symes told me over 80 volunteers assisted with the Dragon Boat event. In bright turquoise t-shirts they were easily visible at Heritage Park on race day, from the docks to the kid’s zone where many children were actively engaged in creating quality themed crafts under their watchful eyes. 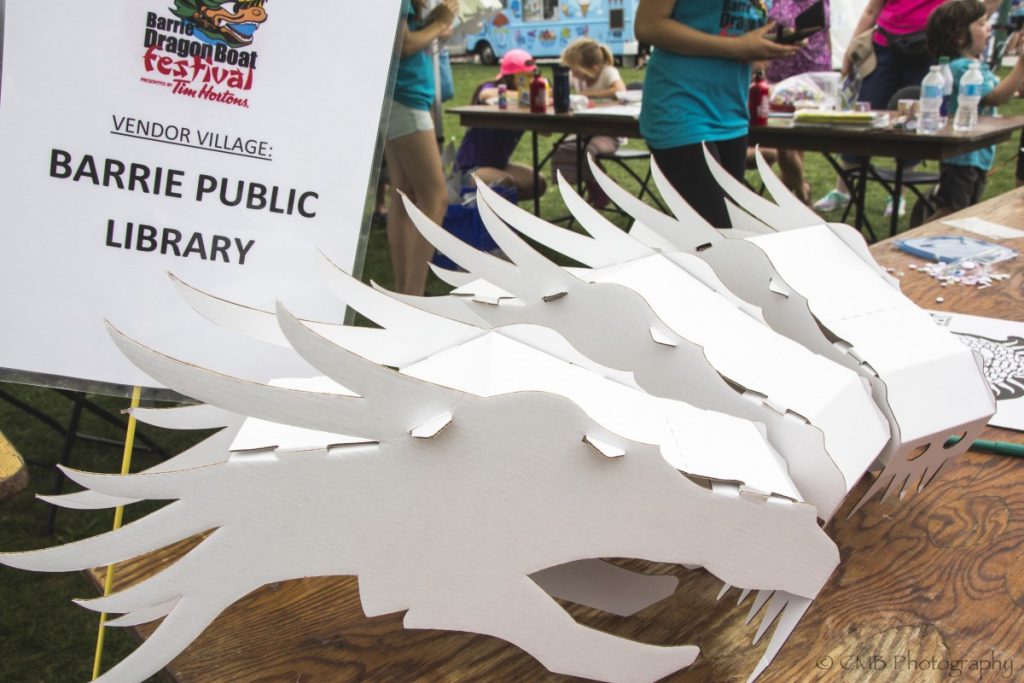 A crash course in learning the use of appropriate lingo was provided to me, with 1300 participating paddlers, I quickly discovered that indeed they paddle, one doesn’t say row. If you are interested in dipping a paddle for exercise or team building to be ready for next year’s race, check the links below for more details. 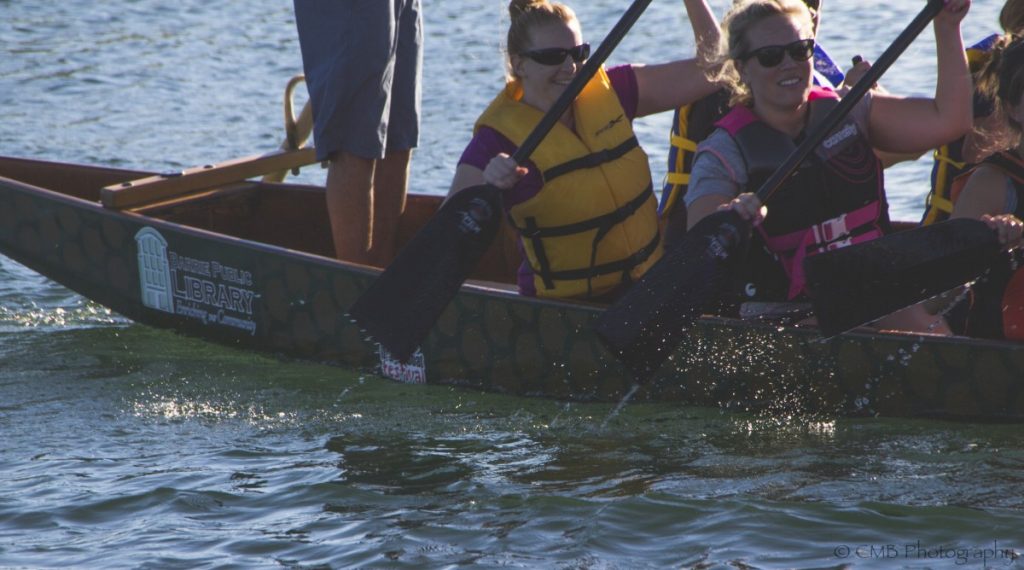 It was an enlightening event to review; while watching the races or walking the site I felt the high degree of commitment and the rush of adrenaline and excitement from participants and spectators. 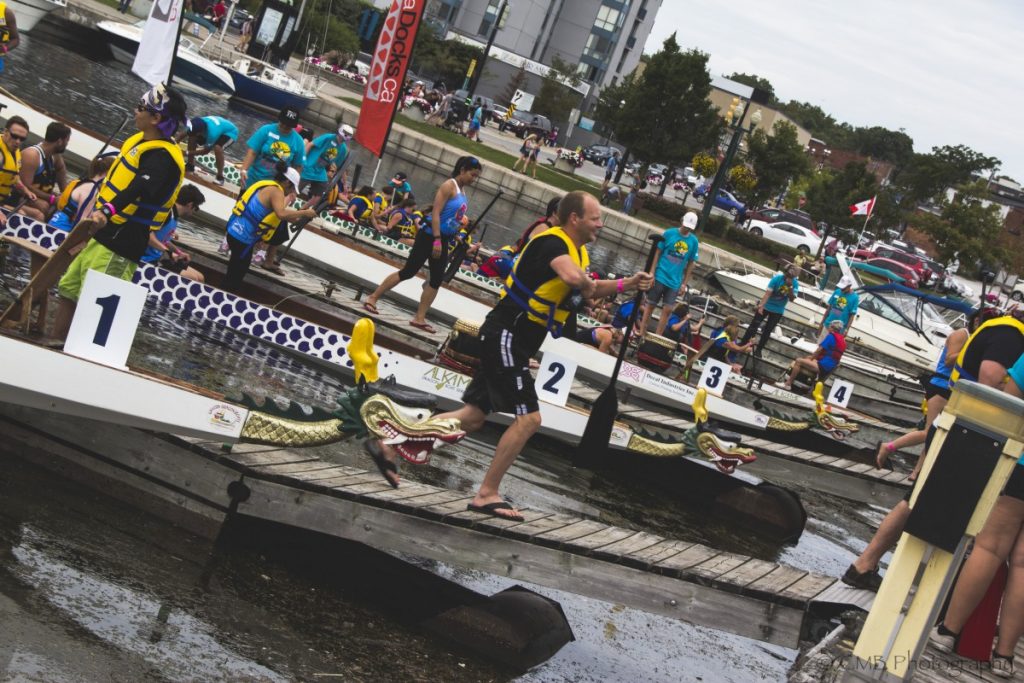 Dragon Boats glide on the water as all paddlers work together, totally focused as they listen to the rhythm of the drum, dipping their individual paddles as one to the call. One steers to set direction, end result, finish line.

The finish line was reached; money was raised, for the library, for charities, like C.O.P.E. our community pulled together. 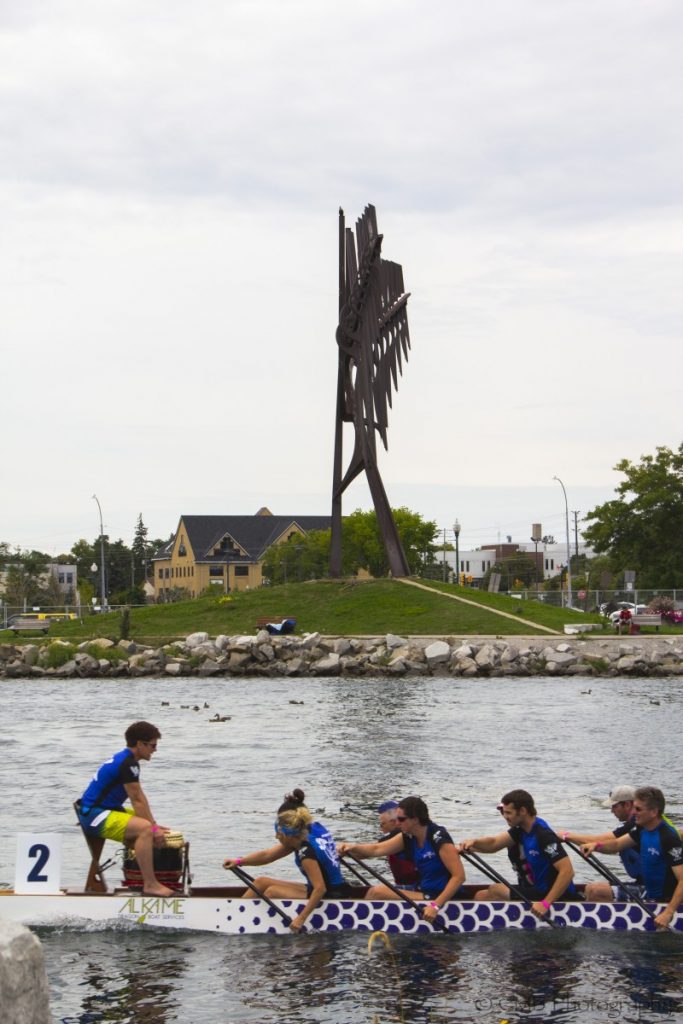 Fundraiser of the Year   The Geri-Antics

The Charity Challenge Cup     Team A20 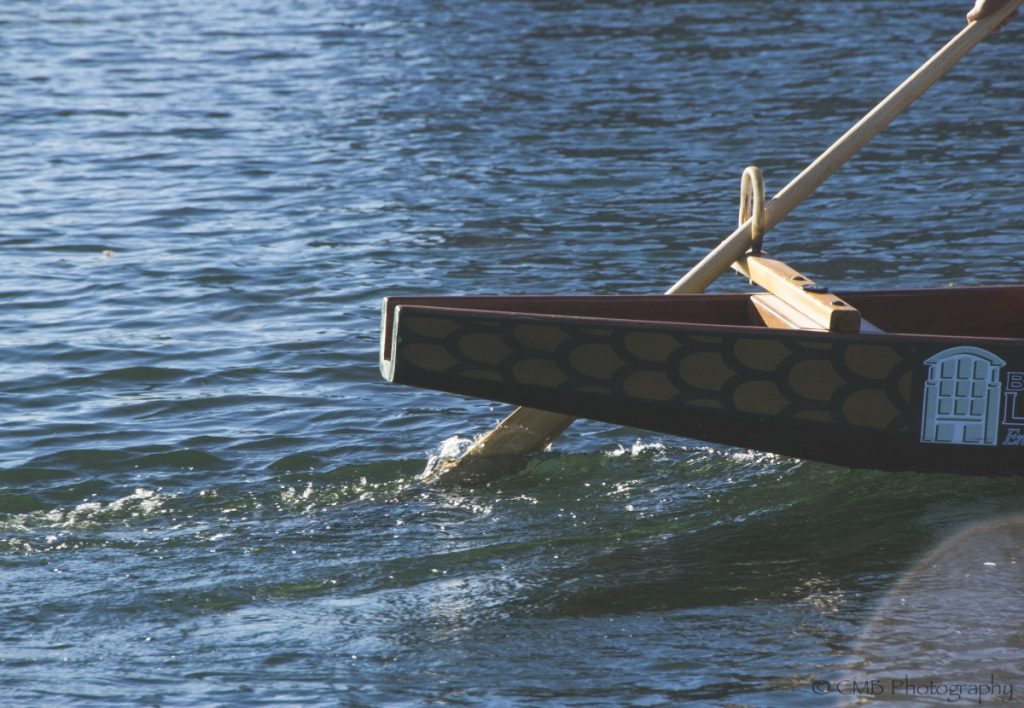 A chance encounter at the stoplights when I complemented a child on the brightly coloured dragon craft she proudly clutched in her hands. The girl turned to her mother and asked “why do people keep saying they like my dragon?” Her mother smiled at me, I like to think that without words we experienced a mutual understanding. Her child represents the next generation; raised in a city that hosts a Dragon Boat race she experienced the magic of giving and is next in line to raise money for the cause.

See you in September!